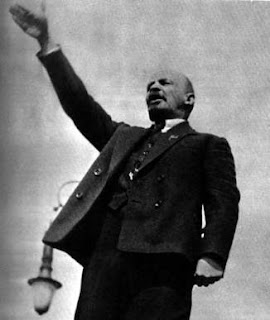 The diacritics on Žižek’s signature hover over his name like vagrant seagulls in the copy of On Violence I picked up in the other day.

I’ve mentioned the book before, so won’t do it again after this, but I liked the Communist joke he quotes on the wife or mistress question. Which would you prefer, Marx, Engels and Lenin are asked. ‘A wife’, replies the uxorious Marx. ‘A mistress’, says the loucher Engels. ‘Both’, says Lenin. And why? ‘So I can tell my wife I’m going to see my mistress and my mistress I’m going to see my wife and be on my own to study, study, study for the revolution.’

Actually, I think it's "Lenin in Helsinki" :)