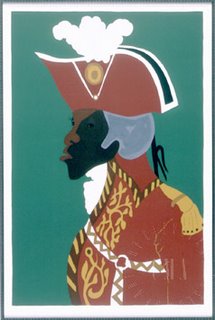 Toussaint l'Ouverture (1743-1803) led the slaves' revolt in Haiti, clashing first with the British and then with the local mulatto forces who wished to reintroduce slavery. By 1801 he had control of much of Haiti, prompting Napoleon to send an expedition against him. He struck a treaty with the French who promptly betrayed and sent him to France, where he died.

Beckett's translations of Jenner Bastien's 'Summary of the History of Hayti' and Ludovic Morin Lacombe 'A Note of Haytian Cultures' can be found in The Negro Anthology.
Posted by puthwuth at 14.3.06