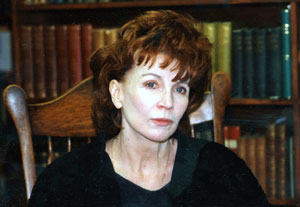 I've already moaned on about some of the error-ridden editions Beckett has been lumped with, but seeing the letters page in today's Guardian I was reminded of the amusing non-facts his biographers have tried to inflict on him too. In the first edition of her biography Deirdre Bair describes Suzanne Dumesnil-Deschevaux happening upon the recently stabbed Beckett on a Paris street in 1938. What a romantic way to meet your future husband! Or it would have been if it had happened, which it didn't. In the proofs of his biography, Anthony Cronin takes seriously the old canard about Beckett having pretended to be born on April 13 1906, rather than May 13, the date that appears on his birth certificate. Except that if he'd checked the birth announcements in the Irish Times he could have seen for himself that Beckett was indeed born in April. He didn't do this, but did check an early copy of James Knowlson's Damned to Fame, in which the false date theory is put to bed. At the launch of his book Cronin mentioned to the journalist Bruce Arnold about having corrected his May 13 mistake. A curious Arnold compared his proof copy and the published text and found that over and over again Cronin had altered the text to bring it into line with Damned to Fame. And lucky he did too, though it would have been nice for him to run an acknowledgement that 'This book was full of errors, which a quick read of James Knowlson's rival biography has thankfully spared me, oh and I've also lifted lots of other material too.' Read all about it in Bruce Arnold's 'From Proof to Print: Anthony Cronin's Samuel Beckett: The Last Modernist Reconsidered' in Samuel Beckett Today/Aujourd'hui 8. And then there's Edna O'Brien. 'You can't go on, I can't go on, I will go on', she claims to quote from The Unnamable in last Saturday's Guardian. Beckett had 'nothing to express with or from or towards, except the obligation to express', she counter-claims to what he actually said to Georges Duthuit. 'Words were my only love and not many', she keeps on misquoting. She describes Belacqua's name as taken from one of Dante's 'unrepentant sinners', despite his residence in Purgatory. She places between quotation marks 'what reads like a drunken version of Beckett's words', Richard Cope writes to the Guardian to say. Her short book on Joyce (let’s not call it a biography) was full of mistakes too. But ah sure aren’t we all Irish geniuses together, Sam the genius, Sam my great friend, Sam the single most famous line in whose fiction I can’t even remember.
Posted by puthwuth at 18.3.06

Who is this woman? Or am I too curious?