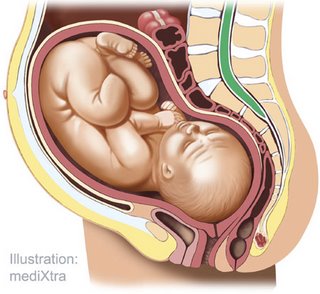 Angry self-destructive foetuses have been voting with their unformed feet and leaving South Dakota in record numbers since the outlawing of abortion in that state.

'Abort abort and they'll blush like new', the narrator of First Love says of his pregnant lady-friend's aureolae.

'A washout', Henry's father calls him in Embers. 'Wish to God she had', he says of his mother. Jack McGowran does a fine reading of the passage on his Claddagh Records Beckett recording, Beginning to End. (Beckett himself features on the album too, playing the gong.)

'I would apply the death penalty to any woman giving birth', suggests Dr Piouk in Eleutheria.

And in an addendum to Watt we read that the 'foetal soul [is] fully grown', on the authority of Cangiamila and Pope Benedict XIV.

Attempts to find out more about Cangiamila were greatly hindered by the profile for this website turning up as result number three on a search (he's listed on the profile). 'What have I done!', I wailed to myself for a bit, before finding out he lived from 1701 to 1763.

Both were associated with the rolling back of 'laxism'. South Dakota legislators and other associated religious types like to call on the great Christian tradition of considering a foetus a human being. But 'twas not always so. Aquinas believed the soul was infused in the foetus at forty days, but not before. A prominent advocate of 'laxism' was Thomas Sanchez, who proposed that a woman could legitimately abort an unformed foetus to avoid public shame of a kind which might endanger her life, and was condemned for this by Pope Innocent XI in 1679.

The 'neo-John-Thomist' Dum Spiro, also in Watt, invokes Sanchez among a host of other theologians in his answer to Martin Ignatius MacKenzie's letter. Careful now!, as the protest placards on Father Ted said.

Still, not even Cangiamila or Pope Benedict thought sperms were human beings too. The Unnamable thinks he might be one (a sperm, I mean, rather than a human): 'the slut has yet to menstruate capable of whelping me [...] a sperm dying, of cold, in the sheets, feebly wagging its little tail, perhaps I'm a dying sperm, in the sheets of an innocent boy...'

Krapp's trysts with that 'bony old ghost of a whore' Fanny were originally 'better than a kick in the crutch', but in later productions of the play Beckett decided they were 'better than the thumb and forefinger'.

As for what Cangiamila or Pope Benedict said about having a wank, sadly nothing is known. As for Sanchez, he was mad for it, mad for it.
Posted by puthwuth at 8.3.06