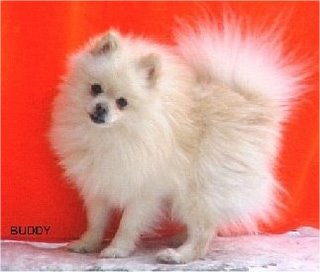 1) Rosie Dew's dog Nelly in Murphy. Eats Murphy's biscuits. All except the ginger one.
2) 'A dog came in the kitchen /and stole a crust of bread. /Then cook up with a ladle /And beat him till he was dead', as Vladimir sings in Godot.
3) Sophie Lousse's dog, knocked down by Molloy and buried in her garden.
4) 'Constipation is a sign of health, in pomeranians' (Molloy).
5) The dog in the park in Mercier and Camier. '"They begin astraddle", said Camier, "and finish arsy-versy."'
6) Hamm's toy dog in Endgame. 'The sex goes on at the end.'
7) Skom Skum in How It Is: 'it licked my genitals Skom Skum run over by a dray it hadn't all its wits'. And also the dog earlier on in How It Is that turns up again in the fragment broken off to form L'image, the text 'translated' by Beckett as 'The Image' (i.e. not translated by Beckett at all) that turned up in As the Story Was Told.
8) The dreaming dog of 'Serena II': 'there shall be no loss of panic between a man and his dog /bitch though he be.'
9) The Lynch twins' dog in Watt, fed Mr Knott's scraps.
10) We had the dog in Krapp's Last Tape before, so instead there's always the absent dog in Rough for Theatre II which provides C with such entertainment: 'He sat doubled in two, his hands on his knees, his legs astraddle, his head sunk. For a moment I wondered if he was not vomiting. But on drawing nearer I could see he was merely scrutinizing, between his feet, a lump of dogshit. [...] When two hours later I emerged from the Post Office, having cashed my order, he was at the same place and in the same attitude.'
Posted by puthwuth at 15.3.06