Monsters of the Solitudes 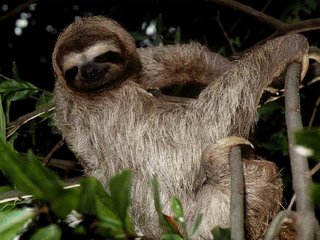 'I am a monster of the solitudes', the narrator of How It Is observes in a zoomorphic mood. We've had parrots and dogs before, so here are some more Beckettian beasties.

1) All manner of creatures from London Zoo in 'Serena II': a mangy boa, a condor, elephants and an adder.
2) Sloths, in the French poem bois seul: 'sors tes yeux se détournent-ils sur les roseaux /se taquient-ils ou les aïs.' The aïs are the sloths, and no I don't really know what they're doing there either.
3) A llama, an alpaca and even a humming bird in How It Is.
4) The Battersea Park sheep in Murphy, now alas departed.
5) The mole in Rough for Radio II that Fox soaps, rinses and dries before replacing in his chamber with a nice feed of grubs.
6) 'What I believe the Germans call a Schimmel' in From an Abandoned Work, i.e. a completely white horse. Though always 'on the look out for a snail, slug or worm' he 'simply will not go' out of his way if they happen to be in it. They have been warned.
7) A centaur, in the Luis G. Urbina poem 'The Centaur's Bath' from the Anthology of Mexican Poetry. Given to 'rude caresses'.
8) The Yeatsian bird among the deepening shades from 'The Tower' that gives its title to the late television play, ... but the clouds... .
9) A smelly decomposed hedgehog in a box in Company.
10) The chess-playing chimpanzees that almost, but didn't quite get to feature on the cover of Murphy. There is an online Beckett quiz that asks if the chimps he wanted for the cover were masturbating, playing chess or scratching. Being effective multi-taskers, there's no reason why they shouldn't have been doing all three. I'm reminded, though, of the chimp in Dublin Zoo who was condemned from the altar by the Archbishop of Dublin for his habit of indulging in the pleasures of the palm in front of bemused schoolchildren. Fact or fiction? The Unnamable mentions that it's possible to masturbate to the age of seventy, after which it becomes mere habit, whatever that means. I don't remember him comparing himself to a chimp, though he does say at one point on the whole human v. animal thing (paraphrasing the Louis Armstrong joke about folk music) 'it's human, a lobster couldn't do it'). Though maybe a centaur could.
Posted by puthwuth at 23.3.06

a vidua bird in Krapp

Ruby Cohn points out in "A Beckett Canon" that "Harvey and Tophoven read the difficult word "ais" as a sloth, but Coulghan argues convincingly for a "brief scene of reeds in a river disturbed by the wind"."