Only a Pawn in Their Game 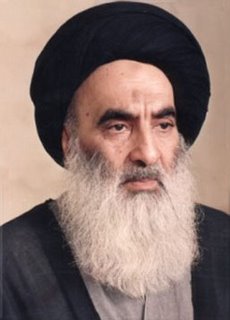 So I said to the Rabbi, I said to him, so that's what you do with all those foreskins! (applause, uproarious laughter)

Next time you drop in on Grand Ayatollah Sistani don't, whatever you do, suggest a good old game of chess. He's decided it's an 'absolutely forbidden' game. According to his webiste:

It is not permissible, because it is a means for Lahv (debauchery) and gambling. Many traditions have been reported from the Holy Prophet and the Imams (a.s.) that prohibit playing chess. Moreover, when we do not know the reason behind the forbiddenness of an act, we are bound to obey in absolute obedience. There is a reason for it, but we do not know it and when we do not know it, it does not mean that we should not abide by it.
Posted by puthwuth at 16.3.06