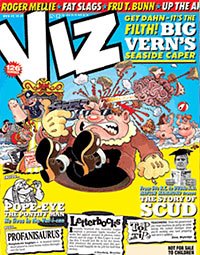 Lots about whales in this month's issue of Viz, as not pictured above.

According to the ever-amusing Profanisaurus, a Thames Whale is 'A large turd which appears in the pan without any explanation, and which is reluctant to return to the sea.'

In 'Have Your Say' M Thrumpton of Treadwell preaches caution: 'I don't trust whales. They have too many teeth and they grin like paedophiles.' Lucy Pencilbox of Okehampton proposes 'a special park in the middle of the Thames with a memorial fountain [for Wilma the Thames whale] and an underwater book of condolence'.

Elsewhere, in Yannick Noah's Ark, whales and wasps go at it flipper to mandible. David Attenborough comments: 'Whales remain one of the hardest members of the animal kingdom to swat with a newspaper.'
Posted by puthwuth at 23.3.06