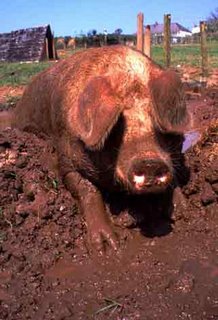 No one eats all that much in Beckett, I must say. Beckett's own favourite dish was liver and onions, we learn from Beckett Remembering /Remembering Beckett. If only to keep him off the liver, let's have some Beckettian fruit and veg:

1) 'How's the carrot?' Vladimir asks Estragon in Godot. 'It's a carrot', comes the reply.
2) 'A turnip, I know roughly what a turnip is like', the Unnamable says during his stint advertising Marguerite's restaurant, 'a carrot too, particularly the Flakkee, or Colmar Red.'
3) Bananas and gooseberries in Krapp's Last Tape. 'Fatal things for a man with my condition, he says of the first', and 'Picking gooseberries' his lady friend says of how she came by the scratch on her thigh.
4) We pass through life as sunlight through cucumbers, we read in Dream, with a hat-tip to Swift's Balnibarbi Academy. That's a yes to sunlight through cucumbers, but a no to Balzac's 'clockwork cabbages', roundly condemned in the same book.
5) Mary the parlour-maid in Watt, addicted to onions (but not liver) and peppermints.
6) Mrs Lambert's lentils in Malone Dies. Must make a pleasant change from all her husband's stuck pigs. The Lamberts are the Louis in the French version: Lambert + Louis = Balzac's Louis Lambert. More clockwork cabbages!
7) Speaking of porkers, 'We now feed our pigs on sugarbeet pulp. It is all the same to them' ('Censorship in the Saorstat').
8) 'the mouth resigned to an olive and given a cherry' (How It Is).
9) This one is cheating, but in Dream Belacqua calls the Smeraldina his 'Brussels Braut'.
10) This one is cheating too, but when Nagg snaps T'occupe pas de mes moignons in Fin de Partie (moignons being stumps) he is punning on the colloquial French way of telling people to mind their own business, T'occupe pas de mes oignons.
Posted by puthwuth at 20.3.06