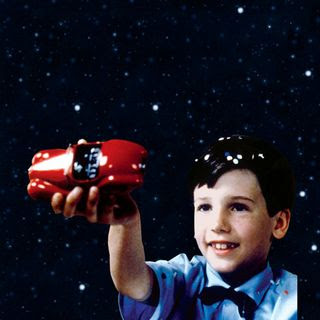 A film worth comparing to Eternal Sunshine of the Spotless Mind is Jaco van Dormael’s excellent Toto the Hero. Toto believes he has been swapped at birth and grows up resenting his much richer neighbour Alfred, who he believes has stolen his life. Toto’s father dies in an accident, flying a plane for Alfred’s father during a storm, adding fuel to Toto’s rage. He is alarmed by a nascent romance between Alfred and his beloved sister Alice, and appeals passionately to their pact of hate. She takes a can of petrol and burns down Alfred’s house, killing herself in the process. But Alfred has not finished usurping his life just yet. Seeing or thinking he has seen his sister at a football game many years later he follows her into a shop and overhears her address. He begins an affair with this strangely reborn . They plan to run away together but she turns up late; he goes to her house and is greeted by Alfred. Alfred has created this pseudo-Alice in the image of his memories and now he has taken her away, again.

The film is framed by the old Toto remembering all this from the nursing home from which he is plotting his escape. Alfred is in trouble. He has laid off thousands of workers and is facing death threats. Toto’s idea is to go to Alfred’s childhood home, where he knows Alfred is hiding, imprison him there and travel to Alfred’s mansion and have himself killed, as he knows will happen, as indeed it does. He thus succeeds in retaking in death what he could not in life. No one else can die my death, as Heidegger said.

Except I think the whole usurpation theme is a sidebar at best to the film’s real theme, which is incest. If Toto has been swapped, is not his sister, and there are no biological obstacles to their romance. But consider how he behaves towards 2. Alfred has turned the woman, Vertigo-style, into a replica of the dead girl, which signals from the off that something unsavoury is going on. Toto's courting of her is, frankly, creepy. When she introduces him to her friends she calls him her ‘brother’. He is unable to make small talk with them and, asked to tell a joke, he repeats one his Downs Syndrome brother has told him. He is a complete social flop, making it all the more puzzling what 2 sees in him. Further, in one of those plot twists rendered completely redundant by the invention of the mobile phone, the missed appointment with 2 doesn’t make sense either. So he is shocked to find Alfred at her house. But now is his chance to say, She loves me, not you. Instead he buckles and gives up. Why? Because if he removed Alice 2 from Alfred’s grip the necessary impediment to their having a healthy relationship has been removed – an impediment on which Toto’s fantasies in fact secretly thrive. Alfred’s relationship with the original would have been incestuous, but this, rather than Alice herself, is what Toto wants – incest. He has a choice between a grown-up, healthy relationship and enslaving in an incest fantasy and he chooses the latter. And if he can’t have an incestuous relationship with her, not being her brother, then someone else has to – hence his need for Alfred, despite all the protestations of hate. And if it wasn’t for the incest alibi he might even have to confront the fact that his stuttering loser persona is who he is really is, rather than it being a by-product of his tragically thwarted love. Incest fantasies as alibis for not confronting the losers we are, eh? God bless ’em.

'toto the hero' sounds interesting. i certainly loved 'eternal sunshine of the spotless mind'! i enjoyed 'on beauty' too, more for its tragi-comic portrature than an accurate depiction of race relations. i just felt i had to give you a shout out after i saw your profile. much love to the contrabassoon from an ex-bassoonist. x