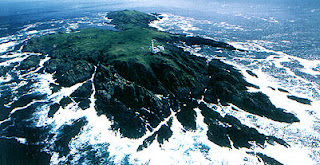 Ireland's most northerly offshore island is geologically a part of Greenland, not Ireland, made as it is from metamorphic gneiss rock. It separated from the rest of Greenland about 1,800 million years ago after a row about Sunday licensing laws. Matthew Sweeney has written a poem about wanting to be buried there, which I assumed was in jest, but no, there's a cemetery on the island and the remains of a school. It was inhabited until 1928.

The ocarina throat-singers of Inishtrahull, whose music involved wedging a perforated stone against their epiglottises, were particularly prized by the ocarina throat-singers of Inishtrahull but no one else. Surprisingly for North Atlantic islanders, Inishtrahull natives never took up fishing but worked exclusively in the insurance business. {Supply own third generic absurdist fact about remote place + post ends}
Posted by puthwuth at 5.4.07