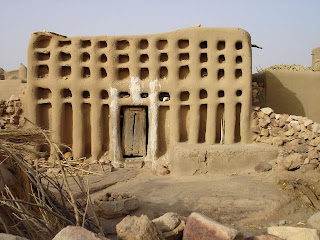 If you find yourself in the Dogon country, mentioned a few posts back, and resist the temptation to mistake the above house for a waffle and pop it in a toaster, its inhabitant, the Hogon (tribal priest) might be persuaded to give you a tutorial in Dogon cosmology. The full explanation, I'm told, takes a week.

Being a busy person, you'll have to make do with the following crash course for now.

The world is created when the God Amma throws a ball of clay into space. It is shaped like a woman and its clitoris is a termite mound. Before Amma can have sex with it, he removes this termite clitoris, thus sanctioning the continuing West African tradition of clitoridectomy. The earth gives birth to a jackal and two half-human, half-serpentine twins. The bad, jackal brother is called Yurugu, and stands for chaos. The twins are the lords of the universe, and are jointly known as Nommo. They cover their mother's nakedness with a skirt, which is the source of language, but which also offends Yurugu sufficiently to induce him to commit incest with her. Hence is born evil. Before clocking off work Amma leaves eight 'ancestors', four male, four female, from whom humanity derive. (Hogon priest continues for another week.) (Snip.)

If you do drop in on the Hogon though, there will almost certainly a French anthropologist present. Tell him to leave the poor man alone and go invent some wacky religions of his own. That should teach him. 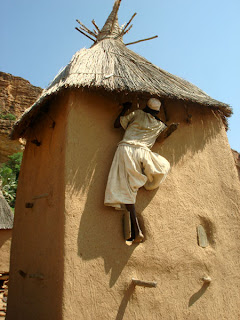