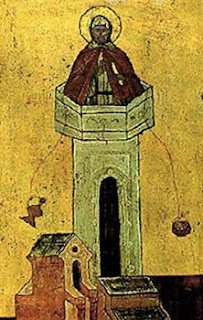 Simeon the Stylite spent 37 years standing on top of a pillar.

In the first volume of John Haffenden's estimable biography of William Empson the young poet-critic hatches plans for 'bumboy in a basket', a kind of Heath Robinson fastfood sex contraption, to be lowered from his student bedroom window then, with a little more effort (yes but think of the rewards), raised back up.

Supplicants would approach Simeon by ladder, and the illustration above suggests a system of ropes for conveying sustenance to him (not that he ate very much), but of bumboys in baskets, history records nary a trace. Surely the idea occurred to him at least once or twice though.

Church authorities became concerned at the cult following Simeon acquired and issued instructions that he descend, lest his austerity become a source of sinful pride. Simeon agreed to the request, but when they saw his willingness to descend the bishops told him to go back up again. I think that counts as negative psychology, of a kind.
Posted by puthwuth at 8.4.07