On the Great Preponderance of the Damned 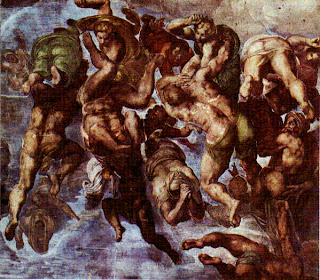 When a 'Catholic Christian' accosts James Clarence Mangan in Rathfarnham at the end of his Autobiography, they fall to discussing matters theological. Mangan upbraids the stranger's naive meliorism, before their exchange is cut short by a mid-sentence aposiopesis.

“Then,” said I, “you know that it is the belief of the holiest and most learned theologians of your church that the majority of mankind will be irrevocably consigned to eternal misery?”
“I know no such thing,” he replied.
“Have you never read Massillon,” I asked, “on The Small Number of the Saved?”
“I take the judgment of no one individual even in my own church,” he answered, “as my guide. The goodness – the justice of GOD –”
I interrupted him. “Stop,” said I. “What do you
{quotation ends}

Massillon was an eighteenth-century French divine. His likeness can be found on the Fountain of the Four Bishops on Place Saint-Sulpice in Paris.

Having once held the manuscript of the Autobiography is my sweaty little palms, I can confirm that it does indeed end there, but that what Mangan was about to say, finally making sense not just of his theological position but of his work as a whole was that