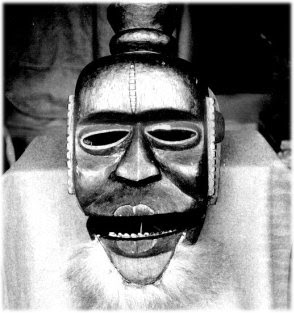 A book I read a few months back but didn't comment on at the time is Zadie Smith's On Beauty. One of the things I noticed about its treatment of race was a constant slippage from race as such, if there is such a thing, to anxiety about race, in a way that got to be a bit perplexing. For instance, when the family attends a classical music concert and Kiki beams with pride at her son Jerome's enjoyment of Mozart, it can't just be because she thinks Mozart is great, it's because she thinks it's great that a black boy is enjoying him. And when Smith writes about Kiki's ample proportions it can't just be because she's a big woman, it's because she's a big black woman with all the emotional wisdom that's meant to bring, in comparison to her skinny-ass white husband. Everything is raised to the second power of being 'about' blackness, worrying, obsessing about it.

This by way of a preface to saying I've been reading and greatly enjoying Nigerian poet Christopher Okigbo who, unless I'm mistaken, doesn't mention being black at all. In fact, he refused to accept an award at a Dakar Festival of Black African Arts in 1966, objecting to its racial dimension. There's an elegy for him in Geoffrey Hill's Canaan, and reading Okigbo now I can see a lot of him in Hill, in particular in the folk song translations of Tenebrae. His work radiates an uncanny ritualistic stillness, even in the face of gathering war, as in the sequence 'Path of Thunder'.

I love his lines 'And lo, /I am the sole witness to my homecoming.'

He manages to be 'tribal' without being 'tribalist' in the way he treats his material, or succumbing to anthropological (auto-)exoticism (though I notice from his Wikipedia entry that several influential Nigerian critics have attacked him for selling out to European modernism). Here is a marvellous poem of his from his 'Watermaid' sequence:

Bright
with the armpit-dazzle of a lioness,
she answers,

wearing white light about her;

and the waves escort her,
my lioness,
crowned with moonlight.

So brief her presence -
match-flare in wind's breath -
so brief with mirrors around me.

Watermaid of the salt-emptiness,
grown are the ears of the secret.