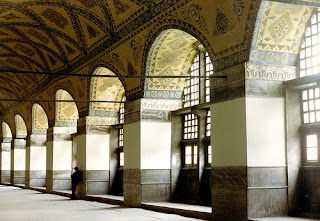 Despite his lifelong handicap of being only seven-elevenths of the writer John Ashbery is (perhaps he could sell his name on to Mark Ford), John Ash is a fine poet.

In a further dispatch from Istanbul, where he now lives, he's got a new book out called The Parthian Stations.

I like his ability to make very direct statements about how not-nice he can be, as in the poem about the annoying man he tries to poison with salmonella for walking around naked all the time and showing him the purple stain on his dick. No one wants to see that! He doesn't die though, to the poet's disgust.

Then there's the one about a couple, one a witch, the other an 'embittered failure', who 'almost killed me', who knows, perhaps by salmonella poisoning:

I was down,
they kicked me in the groin. Fuckers.

But I still live and breathe
with some freedom, while they,
I assume, are suffocating in ignorance
of their unique horribleness.
It would be a mercy to wish them dead.

John Ash. Fine poet. Just don't show him the purple stain on your dick and let him cook for you afterwards.
Posted by puthwuth at 3.4.07

Thank you. I've been reading the ever upbeat Frank O'Hara for two weeks and am sorely in need of a depressant.