The Soft Racism of the Post-Avant 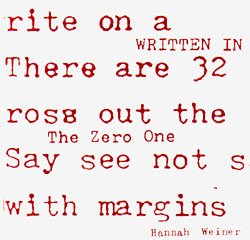 The number of, to use Charles Bernstein’s apt phrase, island poets with an ear that makes sense to a Yank auditory canal is exceptionally small: perhaps, in the past century, just four – Bunting, Turnbull, Raworth, Thomas A. Clark. This is not to fault others – from J. H. Prynne to David Jones to Douglas Oliver or Allen Fisher – whose ears may well make perfect sense on their own terms, but who don’t, how shall I say this, travel well on at least that one level. But I do think it’s an enormous advantage in the pure accessibility of the work.

Yep, Auden's imagery was 'bland' and Yeats was dismissed as 'of no use to us'.

I think the missing piece of the Yank auditory canal is the ability to hear 'ceremonious words'. American poetry is so tuned to the vernacular that it no longer recognises poetry pitched in a higher key.

Got the Sillimen quote wrong. What he said was: "Yeats is interesting, tho problematic, operating out of a context that has little to do with U.S., frankly."
Frankly? Nah. Sounds rather euphemistic to me, a cagey way of saying: Yeats is a fucking bogman. Forget him!

Well, I replied on on Silliman's blog (when it will show up, I don't know). I dislike his 'SoQ' insult, as he seems to apply it to anything he doesn't personally like, which is quite a lot.

But I don't think he was being racist in that particular blog article. He was pointing out only that some poetry travels easier than others. That's how I read it. He was suggesting that Gael Turnbull would be more immediately accessible than Roy Fisher, as his poetry is closer to American speech patterns.

Whether that's true, and whether most Americans would agree is another matter. I'm Scottish, so I can't really comment on that.

Mark Granier said...
This comment has been removed by a blog administrator.
10:42 AM