To judge from his new book, Horse Latitudes, Paul Muldoon continues to suffer from a strange case of what I can only call an existential stammer:

I was baffled, baffled as one who wakes…
(‘Alba’)

Every track was an inside track
where every horse had the horse sense…
(‘The Old Country’, and it goes on like that, all thirteen sections of it)

We cluster at one end, one end of Dillon Gym…
(‘Bob Dylan at Princeton, November 2000’)

I had one eye, just one,
they prised and popped open.

I had one eye, just one,
they prised and propped open
like a Fomorian’s…
(‘The Outlier’)

What’s the difference between clustering ‘at one end’ of the gym and ‘at one end, one end’? It’s something he’s been doing since around the time of The Annals of Chile. You can hear something of the same thing too in. the. way. he. reads. his. poems. aloud. It lends his work, I’d like to suggest, a very low centre of gravity. Whenever something threatens to push a poem into outright obscurity rather than slightly-baffling-but-obviously-very-cute-once-you’ve-worked-it-out obscurity, he can always slam on the handbrake of the Muldoon existential stammer ™. It’ll all work out in the end, the poem says. Just you wait. And in the interval (‘W-w-wait… something will come’, as Henry James used to say, wagging his finger, during his epic pauses), aren’t these poems good enough to read twice? Except, my point is, once already feels like twice. 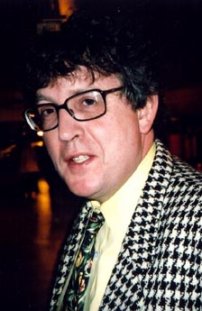 I know what you're saying, but I thought the reading he gave in the BOL Arts Centre in Dublin a couple of years ago was brilliant. Sure, the meaning of many poems continued to elude me, and he does employ a lilting, comic, deliberatly halting manner; though I didn't hear full stops between each word, there were certainly pregnant (almost full) stops to indicate line breaks. But this actually helped bring home the imagery and highlighted the eccentric, Muldoonish music. Most poets don't give you much of a chance to let the stuff sink in; some are haughty or downright resentful at reading in the first place. Muldoon managed to make his reading intimate; he involved everyone in the way a good actor or stand-up comedian can.

May I suggest that he's like a musician riffing on the lyric. I suspect also that he uses repetition to provide balance in a line. Didn't he have that series of poems in Hay which used titles from rock albums? While riffing on the music theme didn't he write the lyrics for the Warren Zevon song, My Ride's Here? And he's done an opera and rewritten the song The Streets of Laredo, as Blackwatertown, which has been recorded by the Handsome Family.

The Handsome family eh? I liked the clip of them playing on the porch of a house that formed an island all to itself in the middle of a lake somewhere in the Deep South, in Jim White's film Searching for the Wrong-Eyed Jesus. As long as there were no alligators around. Muldoon's in a band too, called Rackett. His lyrics for them are coming out as a book next month. And on the subject of Warren Zevon, he closes the new book with his long elegy for him. Lots of references to the gastronomic good life, as so frequently in Muldoon these days. Any day now one of Muldoon's books is going to check itself into a health farm for a detox diet.