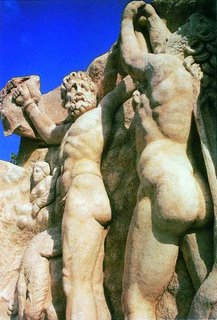 1) Prosperine and Atropos feature in the French poem jusque dans la caverne ciel et sol. Atropos is the oldest of the three Fates and the one who cuts the chord of life, suggesting she is also the noire soeur of the final mirlitonnade, ‘qui es aux enfers / à tort trenchant /et à travers.’

2) ‘Suave mari magno’, Malone remembers from Lucretius’s De Rerum Natura. ‘‘Tis sweet on graund seas, when windes waves turmoyle, /From land to see an others greevous toyle’, as Florio translated it. Ludovic Janvier remembers Beckett quoting the line to describe his hostility to theatre audiences who presumed an immunity to what they saw on stage. My spellcheck wanted to change ‘magno’ to ‘mango’, but that’s a different Lucretius poem altogether.

3) ‘Atlas, son of Jupiter!’, Pozzo exclaims in Waiting for Godot. Except Atlas is the son of Japetus, as was pointed out to Beckett, who then changed the line. ‘Pan sleeps’, Pozzo says too.

4) And then in the second act when he comes back and falls over, and Estragon and Vladimir do too, Estragon identifies himself in the French text as ‘Catulle’. And memoria praeteritorum bonorum, Vladimir says a bit later.

5) The Watt addendum in Latin beginning Faede hunc mundum intravi is Aristotle’s last words: ‘filthy I entered this world, anxious I lived, perturbed I leave it, cause of causes why I’m so miserable.’

6) Richard Ellmann describes Joyce getting Beckett to check out Greek quotations for him, and in Mercier and Camier Mr Madden gives us a blast of Homer: ‘Homer tells us, Iliad Book 3, lines 85 and following, in what consists happiness here below, that is to say happiness. Oh I gave it to them! Potopompos scroton evohe! Like that, hot and strong! […] Potopompos scroton evohe, the soft cock and buckets of the hard.’

7) The Unnamable holds forth angrily on Prometheus: ‘For between me and that miscreant who mocked the gods, invented fire, denatured clay and domesticated the horse, in a word obliged humanity, I trust there is nothing in common.’

8) And also mentions a ‘galley-man, bound for the Pillars of Hercules’, and the Colossus of Memnon.

9) The Hölderlin poem mentioned, garbled rather, in the fourth section of Watt is Hyperions Schicksalslied, ‘Hyperion’s Song of Fate’, sung by the Titan who also inspired that long poem (those long poems) by Keats. The lines should read:

10) And finally, the narrator of First Love ‘divellicate[s] urtica plenis manibus’, meaning he vigorously tears up nettles. Maybe the phrase is a token protest against moving away from Latin, from French to English, since in Premier Amour it appears as the humbler ‘Arracher à pleines mains les orties.’
Posted by puthwuth at 11.10.06