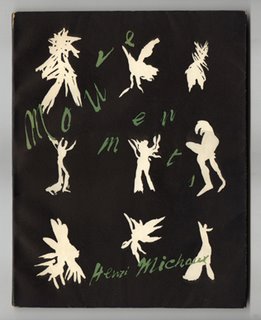 Two Beckettian orphans I found trawling around on the Editions de Minuit website.

First, a reference in their chronology of Beckett's life to a 1949 translation of Henri Michaux's poem À hue et à dia (as 'To right nor left') for the little review K. That's one for the bibliography.
And second, a French version by Edith Fournier of the rare text 'Ceiling' in the expanded 2002 edition of Pour finir encore et autres foirades, available in print in English only in the 1985 tribute to Beckett's Israeli artist friend, Arikha (Thames and Hudson), though an online version can be found here.

And since we're talking Beckett rarities, another one I found recently is the uncollected poem 'pss' in the Spanish edition of the poems, Obra Poética Completa (Hiperión, 2000). It originally appeared in New Departures in 1981, and begins as follows:

there
the life late led
down there
all done unsaid
Posted by puthwuth at 10.10.06