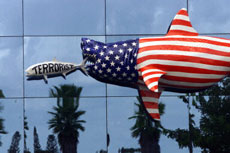 Since Rob McKenzie questioned my use of the phrase ‘soft racism’ to describe Ron Silliman’s position on poetry from this side of the Atlantic, I thought I’d expand on it a little. Silliman, it seems to me, speaks from a position of unearned and unquestioned American exceptionalism, which he feels licenses him to write off whole other poetries that he, as an American, can’t ‘hear’. As readers, we’re all familiar with the effort involved in tuning in to foreign poetry: a British reader, whose idea of contemporary poetry was Simon Armitage, would find contemporary French poetry very disorienting, wholly lacking in the wised-up, slap-happy colloquialisms and pop-culture references that make up so much British poetry today. Except, at this point, readers who can’t quite hear what’s going on can make the simple choice to listen a little bit harder. Silliman doesn’t and won’t: he says, I can’t hear you, therefore you have nothing of interest to tell me. Or if pressed, he has his ‘School of Quietude’ alibi: I don’t need to listen; I know your kind; I know what you’re like. And that seems to me, in the most obvious way, a piece of literary chauvinism and, why not, soft racism.

It’s both poignant and laugh out loud funny, in the new collection of William Logan’s reviews, The Undiscovered Country, to find him ticking off American readers for their provincial slowness to recognise the talents of foreign but US-based poets such as Muldoon and Maxwell, since from Silliman’s point of view to take an interest in these people would already be a form of provincialism because – and at this point in the argument the ‘School of Quietude’ alibi kicks in and all chance of meaningful discussion has been lost. But ‘frankly’, to use the Silliman word Mark has quoted in the comments, poets who refuse to listen to other poets (which is their right, after all) should at least do better than trot out excuses with about as much intellectual credibility as ‘My daddy said I wasn’t allowed play with you anymore.’

But then, even as I type this, I see a posting on Silliman's blog linking to a 'School of Quietude poem that I genuinely like' (he means one by Frank Bidart). So maybe there's hope for ole Silliman after all!
Posted by puthwuth at 15.10.06