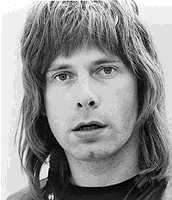 'Pushing up, hard and fibrous
from the ground, it is said to be
grown for the mouth...'

Yes, it's the familiar sound of a Robin Robertson poem ostensibly about food but which is in fact about sex. There was 'Artichoke' in his first book ('The meat of it lies, displayed, /up-ended, al dente, /the stub-root aching in its oil'), and now he's done it again in Swithering, with 'Asparagus': 'the dark tip – slubbed and imbricate, /tight-set and over-lapping round the bud.'

Those Heaneyisms aside, whose voice am I hearing in there too? I'll interleave some lines from the man I mean with those of 'Asparagus' to help spell it out.

'You know very much like, I'm really influenced by Mozart and Bach, and it's sort of in between those, really, it's like a Mach piece really...'

'Steamed till supple /so the stem is still firm...'

'This song is in D minor. The saddest of all keys. People weep instantly when they hear it...'

'In a slather and slide, butter /floods at the bulb-head.'