The Entertainment of Idiots 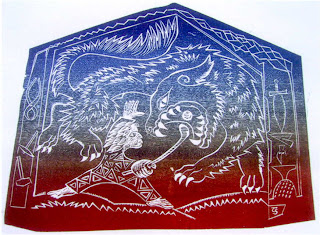 Ciaran Carson’s translation of the Táin Bó Cúailnge, just out from Penguin. A ‘simply appalling text… endlessly scribbled over’, Frank O’Connor called it (the original). recounts one story of the text’s origin:

Senchan the High Bard of Erin comes to stay with Gúaire, a prince of , together with his entourage of three fifties of master poets and three fifties of apprentices, each and every one of them with two women and a servant and a dog. They eat him out of house and home, since Gúaire is forced to gratify their every whim for fear of satire. When Gúaire’s brother, the hermit Marbán, hears of this he curses them, taking away their gift of poetry until such times as they can recite the whole of the Táin. For a year and a day they scour interviewing bards and storytellers in search of the Táin, with no success, for only fragments of that long story survive. At last Senchan goes to Colm Cille, who takes him to the grave of Fergus Mac Róich, one of the chief protagonists of the Táin. Fergus, summoned from the grave by Colm Cille, proceeds to narrate the whole story, which is written down by St Ciaran of Cluain on the hide of his pet dun cow: hence Lebor na hUidre, ‘The Book of the Dun Cow.’

also describes the rírá agus ruaille buaille between St Finnen and Colm Cille over the manuscript of Finnen’s that Colm Cille asks to borrow. (In possibly the only funny thing she has ever said, Ruth Dudley Edwards once suggested that the Real IRA and the Continuity IRA be renamed rírá agus ruaille buaille.) Finnen refuses and Colm Cille secretly borrows and copies the text, working by the miraculous light of his five illuminated fingertips.

Oddly, doesn’t mention the sequel to this early copyright infringement. The two saints fought a battle at Cooldrumman in which over three thousand people were killed.

The monk who copied the text of the Táin to be found in the Book of Leinster ended his ‘redaction’ with ‘a blessing on everyone who shall faithfully memorize the Táin as it is written here and shall not add any other form to it’, before entering a Christian caveat: ‘But I who have written down this story or rather this fable, give no credence to the story, or fable. For some thing in it are demonic deceptions, and other poetic figments; some are possible, and others not; while still others are for the entertainment of idiots.’

Very pleasing to learn from a footnote that one possible meaning of the Irish name Fergus is ‘male ejaculation’. No less beguiling is the fact that Queen Medb’s entourage (‘I had fifteen hundred royal mercenaries, the sons of exiles, and as many more the sons of freeborn native men, and for every soldier of them I had ten, and for every ten I had nine more, and eight, and seven, and six, and five, and four, and three, and two, and one. And that was just my household guard.’) comes to a total of 40,458,703,000 persons.

I was sorry to see Maria Tymoczko’s name misspelled, twice in fact, in the introduction. Her The Irish Ulysses is one of the best, the most instructive books about Joyce I’ve read.