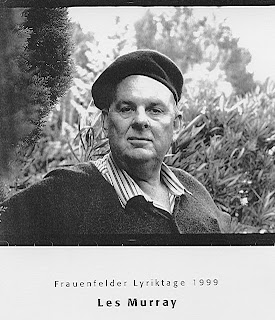 Listening to Les Murray read the other evening in a half-empty village hall I was struck again by how skilfully he manages to perch such a large and generous vision on so slender a foundation of self-pity. Because self-pity really is there, at the taproot of his work, I think. His elegy for Joseph Brodsky, ‘Church’, begins:

The wish to be right
has decamped in large numbers
but some come to God
in hopes of being wrong.

We are always in the wrong before God, Kierkegaard wrote. After any triumph, he is ‘as usual inconsolable’, has written. But in general the pleasures of feeling in the wrong rather than wronged won’t get you very far, in Murrayland. The driving force of his work is a rage against injustice and bullying that likes nothing better, in recent years at least, than flipping over into a form of semi-controlled but more often incontinent bluster. It’s controlled in his public readings anyway, where I’ve noticed he shies away from the more fire-breathing Catholic stuff. But anyone who’s followed his career back home as well as on the European circuit will know what a doughty culture warrior he’s been. In Peter Alexander’s biography of (a book that survived the pulping of the first print-run for legal reasons) the attacks on Subhuman Redneck Poems is glad-handled into irrelevance:

Many of the poems spoke for Cecil and for ’s people, the rural poor, against those who would patronise and suppress them: perhaps 10 per cent of the volume’s poems, as a result, were passionately indignant. The critic Don Anderson, whose judgement respected, picked out this group of poems for condemnation and listed them by name, calling them ‘vile’. felt they had hit the target: ‘He named all the right ones’, he remarked with a grin.

Here’s Alexander on Murray versus the Liberal Media Elite, a contest fought in a mood not unlike Homer Simpson’s when Moe tells him his it was ‘politics’ that ended his boxing career (‘Lousy Democrats’):

The ferocious, massed attack on her was a phenomenon he recognised from Taree High, and he would do his best to stand against it wherever it found a victim. He considered that Darville’s crime lay in showing up proponents of multiculturalism, and in ‘talking about dangerous material, the Holocaust and, more dangerous still, the immense slaughter, the killing fields, of the Communists—you're just not allowed to mention that stuff. The Communists have an enormous interest in suppressing all that history.’

Red-brown moral equivalence and all that, in other words, or not even equivalence: the red lot are obviously much worse. The victim here is Helen Darville/Demidenko, the recently outed hoaxer who had belied her Home Counties roots to publish a fairly iffy (anti-Semitic) novel about the Ukrainian famine of the 1930s. Shortly afterwards the media moved on to Pauline Hanson, a pigshit-thick racist politician, but victim of media hounding and therefore in need of defending.

The foundations of ’s self-pity are all there in the last of ‘Twelve Poems’, from The Biplane Houses:

Filling in a form
the simple man asks him mother
Mum, what sex are we?

Country rather than city. A ‘simple man’, who you – you liberal bigot – are just waiting to insult, patronise or dump in a home. And a ‘simple man’ with a nice friendly old mum to look after him, and even save him from the hideous depredations of sex, which as we’ve already established ‘is a Nazi’. But a simple man who also has Les Murray on the case, checking for reds under the bed, taking on the no-good media, and selflessly taking the good fight to the fleshpots of Melbourne and Sydney on his behalf.

And my point in all this is: there’s something really nasty about ’s worldview, but I admire the way insists on trying to make poetry out of such an ugly, even repulsive side of his ‘redneck’ Catholicism. Because when I read Heaney, writing out of a similar rural Catholic background, I can’t but get impatient at how much he fails (unlike, say, John McGahern) to show the cruelty and narrowness of the conservative Catholic universe, alongside all the good things Heaney got from it too. So although I read the nasty poems in a spirit of open hostility, I prefer his ability to render his religious worldview in the round (favourite Murray shape) to what I consider the soft, nostalgic version of Catholic Ireland I get from Heaney. So my point is (one more time): if you’re a writer and have a nasty side, show it. Another of ’s ‘Twelve Poems’ reads ‘To win me, they told me /all my bad attitudes /but they got them wrong.’ Well, put us right then. Be as bad as you can. Get it all out there. Just don’t be bland about it.

This is an interesting take on both poets. I too enjoy the roughness of Murray's work. I loved that opening, "Sex is a Nazi", the moment read it, though it’s the rest of that line, and the others that make up the first stanza, that give the poem that belligerent Murray cock-sureness:
“Sex is a Nazi. The students all knew
this at your school. To it, everyone’s subhuman
for parts of their lives. Some are all their lives.
You’ll be one of those if these things worry you.”
Murray is the only poet I can think of who has had a go at translating pig into pig-English and (as far as I’m concerned) succeeded. I wouldn’t call him self-pitying, though it seems the huge boulder on his shoulder and his very productive muse are almost one and the same.

Where Heaney is concerned I feel your dismissal is a tad sweeping (or bland), though I’m sure those noddingdog Heaney begrudgers, would agree with you. Nostalgia? Yeah, in places. But much of his work has a dark edge, as in the sonnet ‘The Nod’ or Hofn (from District And Circle). When I read Heaney (or McGahern or Murray for that matter) I don’t slot the poems or stories into my ‘rural Catholic background’ file. I accept them on their own terms. If, for example, the rhythm is faulty and (as I think Longley put it) a poem dies of heart failure, that is hardly the fault of the subject matter or whatever emotion (nostalgia, love, fear…) acted as a vehicle.

Heaney shares Murray’s background in as much as it is rural, but I suspect Heaney’s upbringing had little in common with Murray’s. After all, Heaney seems to have flourished at home and in school, and had no cause to be embarrassed or afraid of bringing friends home to a shack with a dirt floor and tin washbasin or (in McGahern’s case) an icily charming bollocks of a father. Okay, the North wasn’t Butlins, and Heaney has had to deal with its murky political shenanigans, including the murder of friends and relatives. He has addressed these things in his poems with honesty and artistic tact.


Anyway, from Heaney's first book, and its title poem, I would say a dominant anti-nostalgic current has run through the work: frogs are "mud grenades", "their blunt heads farting", the apprentice poet’s pen is ‘snug as a gun’, drowned kittens are "scraggy wee shits" (presaging those sectarian assassins in Station Island: "shites, thinking they were the be all and end all"), and the neatly parcelled meat in‘The Nod’ is ‘seeping blood’.

Heaney’s rural toughness (if not roughness), along with those dialect words (‘hoked’ and so on) is something he has been lampooned for. Sure, he displays affection for certain memories (in Bogland, The Swing, The Skunk, Postscript, The Settle Bed, Alphabets and so on) but that’s his prerogative, and in the best of the poems the language could hardly be called ‘bland’. Rather, I’d agree with Don Paterson who said that Heaney’s words are “so finely calibrated you can weigh air and light in them”.

I now see my response is rather laboured, too much 'sprawl'. You made your own point succinctly enough, and I should have whittled my argument accordingly (the perils of late night blog-commenting). But I stand by what I said, and there are one or two points in there, if you can be arsed finding them.