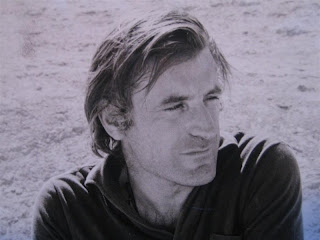 Now don’t, sir! Don’t expose me!
Just this once! This was the first and only time, I’ll swear,—
Look at me,—see, I kneel,—the only time,
I swear, I ever cheated,—yes, by the soul
Of Her who hears—(your sainted mother, sir!)
All, except this last accident, was truth—
This little kind of slip!—and even this,
It was your own wine, sir, the good champagne,
(I took it for Catawba, you ‘re so kind)
Which put the folly in my head!

Elizabeth Barrett Browning’s devotion to psychics; Robert’s detestation of them. At a séance both attended, one Daniel D. Home or his spirit proxies raised a wreath from a table and placed it on EBB’s brow. Browning ‘stamped on the floor in a frenzy of rage at the way some believers and mediums deceived Mrs. Browning’, and offered to throw ‘this dung-ball’ (Home) down the stairs.

Ted Hughes, newly squeezed into an 800 page Selected Letters by Christopher Reid, writes to Lucas Myers in 1956 that he has been experimenting with a ouija board: ‘We asked if it knew Shakespeare. It said Yes, but not personally.’ Its favourite Shakespeare line is ‘Never, never, never, never, never.’ ‘Another time I did it with Sylvia. We got one who swore, gave out the most incredible obscenities, and kept refusing, saying “I’m tired.”‘ Pan (as Hughes calls the chief voice) offers to predict the weekend’s football results, for the pools, but gets the scores wrong by one goal per fixture.

But cf. not just the Birthday Letters poem on the ouija board but Hughes passim. Thirty years later he writes to tell the dying Larkin (oesophageal cancer) of ‘a very strange and remarkable fellow down here, quite widely known for what seem to be miraculous healing powers… He heals every kind of illness. Recently he held a party with twelve guests – all ex-patients of his: six of them had been terminal cancer, six with cancer in some earlier phase – all now quite clear.’

Better still, ‘It isn’t absolutely necessary to meet him. All he seems to need is name, details of place – but best of all contact over the phone.’

Which reminds me. The man who made Philip Larkin’s hearing aids was called Raymond Cass, and pioneered pataphysical, sorry psychic research into Electronic Voice Phenomenon (EVP).

In the words of the Raymond Cass Foundation website:

Famous inventors such as Thomas Edison, Guglielmo Marconi, Nikola Tesla and Oliver Lodge all had a drive to build devices to make ‘contact with the unseen’. This was obviously a euphemism for ‘contacting the dead’. Thomas Edison helped by inventing a medium for which audio could be recorded onto a gramophone and played back. He was also working on inventing a machine which could communicate with the spirit world. Sadly he passed away around 1931 without getting a chance to publish any of his notes.

At the end of the 1950’s, Friedrich Juergenson, a Swedish Film maker/Psychic originally from , was recording a documentary. When he played the tape back he heard many extra ‘voices’. He was out in the woods capturing birdsong. When he played the recording back he heard unaccountable voices on the recording. This instigated Friedrich to study EVP. He famously used a reel to reel tape device and recorded his mother’s voice (Who has passed away years earlier). The reel to reel medium was a breakthrough in EVP research. Friedrich Jurgenson is considered by most to be the ‘Father of EVP’.

In the Early 1970’s Raymond Cass from started his journey recording voices at his office in the centre of . Cass did many years of research coming up with more than 2000 examples of EVP. Cass was the pioneer of EVP research in the .

What are the voices?

Initially there were 3 main theories of what these voices could be.....

1) Deceased persons having survived the death of their physical bodies
2) Voices come from operators sub conscious (Psycho Kinesis)
3) Breakthrough from a parallel universe.

So far results are far in the favour of number 1.

Now that Mr Cass has ‘gone over’, it is left to his widow to carry on his work. I remember an article about her in the local paper and her reports of communications from the other side from Philip Larkin, which seemed about on a level with the Virgin Mary’s communications to excitable pre-pubescents in less Protestant countries, with slightly less reference to the rosary and abortion. He remained very pleased with the standard of her late husband’s hearing aids though, I think, though why he couldn’t just go and tell him himself I don’t know.

Charlie Brooker, whose collected TV-related bile-spew has been published as Dawn of the Dumb is less convinced. The index to the book does, after all, contain an entry for ‘unforgivable subhuman cock-suckers, see psychics’, but in among the descriptions of what he’d like to do to presenters of programmes about communicating with dead children I enjoyed a reference to a supermarket tabloid called Chat:

Ruth the Truth (‘Chat’s psychic agony aunt’) doles out important advice such as ‘Janice from Pembroke – the squirrel in your garden has a message.’ (…) There’s also an ad for a spin-off mag, Chat: It’s Fate, which looks even better, i.e. worse (sample: ‘MY PHILIP MURDERED ME – SO I HAUNTED HIM UNTIL HE KILLED HIMSELF.’)

{Quotation ends}And finally, to complete my trawl through goings-on on the far side, Jon Ronson profiles TV psychic Sylvia Browne in today’s Guardian. A sample of Sylvia Browne at work, on the Montel Williams Show:

‘I need to know where Opal is. I can’t stand this. I need your help, Sylvia. Where is Opal? Where is she?’ Sylvia said, ‘She’s not dead. But what bothers me – now I’ve never heard of this before – but she was taken and put into some kind of a slavery thing and taken into . The place is Kukuoro.’

‘So she was taken and put on some kind of a boat, or a plane and taken into white slavery,’ Sylvia said.

Opal’s grandmother looked drained and confused. Opal’s body was eventually found buried in . She had, the pathologist concluded, been murdered the night she went missing.

‘Fixed stars govern a life’, as Hughes’s partner in the occult once wrote. They do indeed. It’s just a pity that so often the fixed stars in question are those of scum-sucking moronism and congenital brain-felch. Don’t blame me though. Go take it up with the squirrel in Janice from Pembroke’s garden. He’s got a message for you, after all. 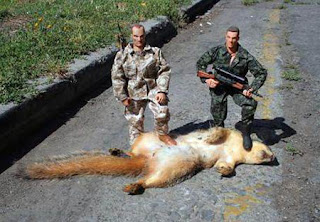 orry., what was that you were saying? It's hard to read straight with that picture of Ted Hughes looking like that up at the top. Then we seemed to be getting into James Merrill territory, and the next thing I know, a rant! A bit early in the day for us here at Baroque Somnambulists.

I recall - I know I do - hearing the weirdest thing in the world on Radio 4 one time (I know!). It was about, I guess, what you're calling EVP. I wish I could remember more about it, I'm sure it was 20 years ago... essentially the upshot was that some researchers discovered these voices on their tape, and after doing loads of recordings in different buildings they felt that the voices were in the walls of old buildings. Like vibrations from the past. On the radio they compared it to a dinner party, with everyone talking at once, except of course not to each other.

Strange. I've always remembered that, but foolishly thought it was a one-off till I read your piece.