Lives of the Saints 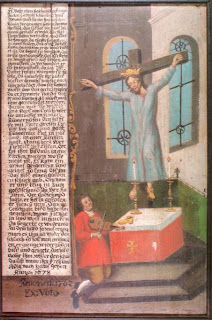 Saint Catherine of was given to licking sores. Lepers’ sores in particular she couldn’t resist.

Saint Ursula is credited with eleven thousand virgin handmaidens. Wallace Stevens wrote a poem about them.

Saint Christina the Astonishing had herself strapped to a mill wheel, and round and round she went.

In The Gathering Anne Enright mentions three Roman martyrs who had mustard stuffed up their noses. I doubt if that was the sole method of martyrdom, somehow, but it might have made a nice touch after garrotting or beheading.

Saint Dionysus was beheaded and promptly picked his head up and presented it to his executioner.

Saint Martin de Porres is probably, alongside Phil Lynott, the only black man that Irish Catholics of my generation grew up feeling they had a personal relationship with.

Saint Margaret Mary Alacoque drank the dirty water from her convent laundry until she succeeded in paralysing herself. That must have pleased her no end.

Saint Maria Goretti is the only saint whose mother was present at her canonisation, as was the man who had murdered her half a century before, and who subsequently became a Capuchin lay brother. She chose death over defilement.

Saint Wilgefortis prayed to be spared marriage and sprouted a beard. For this disobedience she was crucified by her father. She almost certainly did not exist.

St John of the Cross. This poor chap was imprisoned upside down in a tiny windowless cell for 9 months, by the Spanish Inquisition, but still managed to churn out a few poems
http://www.cnca.gob.mx/viola/5.html

He'd be a favourite Saint of mine. Haven't read his stuff, but I'd say it's good.

Surprised the black pearl didn't get a mention here after his exploits in Euro 88, World Cup 90 and 94. I'm a Lizzy fan, but the list should read as follows:
1. Paul McGrath
2. Phil Lynott
And a distant third: Martin de Porres