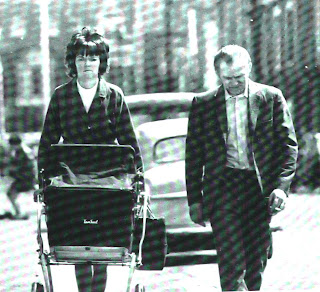 Just walked down the corridor for a pee and came back laden down with flotsam from the great Bête Noire garage sale I found going on outside my esteemed colleague John Osborne's office door. If anyone fancies free back copies of this chock-full-of-Hull-poets big small mag of the 80s and 90s, go pick some up now. I have a particular fondness for the Terry Street revisited special issue, which paired Douglas Dunn's poems to photographs by Robert Whitaker, not least the one on the cover of the young urchin standing in a Hull tenfoot very solemnly gripping his parts.
I also picked up some LPs that were being thrown out, including a double album called The Dial-a-Poem Poets, which features Ashbery, Baraka, Burroughs, Cage, Coolidge, and so alphabetically on to Waldman, Whalen and Wieners.
As John Giorno wrote of the project (and is that he doing the phone as penis stunt on the album cover? We can only hope so):
One day a New York mother saw her 12-year-old son with two friends listening to the telephone and giggling. She grabbed the phone from them and what she heard freaked her out. This was when Dial-A-Poem was at The Architectural League of New York with worldwide media coverage, and Junior Scholastic Magazine had just done an article and listening to Dial-A-Poem was homework in New York City Public Schools. It was also at a time when I was putting out a lot of erotic poetry, like Jim Carroll's pornographic "Basketball Diaries," so it became hip for the teenies to call. The mother and other reactionary members of the community started hassling us, and The Board of Education put presssure on the Telephone Company and there were hassles and more hassles and they cut us off. Ken Dewey and the New York State Council on The Arts were our champions, and the heavy lawyers threatened The Telephone Company with a lawsuit and we were instantly on again. Soon after our funds were cut, and we couldn't pay the telephone bill so it ended. Then we moved to The Museum of Modern Art, where one half the content of Dial-A-Poem was politically radical poetry At the time, with the war and repression and everything, we thought this was a good way for the Movement to reach people. TIME magazine picked up on how you could call David and Nelson Rockefeller's museum and learn how to build a bomb. This was when the Weathermen were bombing New York office buildings. TIME ran the piece on The Nation page, next to the photo of a dead cop shot talking on the telephone in Philadelphia. However, Bobby Seale, Eldridge Cleaver and The Black Panthers were well represented. This coupled with rag publicity really freaked the Trustees of the museum and members resigned and thousands complained and the FBI arrived one morning to investigate. The Musuem of Modern Art is a warehouse of the plunder and rip off for the Rockefeller family and they got upset at being in the situation of supporting a system that would self-destruct or self purify, so they ordered the system shut down. John Hightower, MOMA Director, was our champion with some heavy changes of conscience, and he wouldn't let them silence us, for a short while. Then later John Hightower was fired from MOMA and Ken Dewey recently flying alone in a small plane crashed and died.
{Quotation ends}
You can read more (and listen) here. I'll be doing so too, since despite my new acquisition I find myself in Grampa Simpson's predicament when he snapped up Krusty the Clown's pornography at a bankruptcy auction: now if only I had a pornograph to play it on! But I don't.
Posted by puthwuth at 17.10.07

That's a real blast from the past - no one ever says "hassle" like that now - as a verb - and certainly not with the casual convistion it once carried...

I have a pornograph, in fact my kid has one I could use to turn the poems into mp3s...

If you'd like a free Bete Noire (Terry Street issue or any other one of your choosing), let me know!

Oooh, well it would go against my essential nature to say no. And I love Dunn.