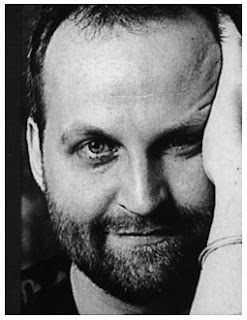 As inspired by Don Paterson’s new book of aphorisms, The Blind Eye.

A thunderclap of inspiration during sex. I confess as much afterwards, that and my momentary temptation to feign, or even trigger, a premature resolution to our strenuous congress. And how like her to fly into a rage, not at my temptation, but my failure to act on it. My sexual pleasure may have belonged to me, but my poetry always belonged to her. We broke up a month later after a particularly vitriolic argument over who was the greatest Delta bluesman (Lightnin' Hopkins?!).

Irresistible urge, during a lunch with M., who ventures the suggestion that half the people who send him their work these days may as well just pop a turd in the jiffybag instead, to point out – Well, at least they’ve chosen the one person I know who’s likely to eat the damn stuff.

Capax imperii nisi imperasset, as Tacitus said of Galba. N., whose abilities I have always previously admired, and who seemed to me the sagest of man, makes the appalling announcement that he has begun to write. And not just poetry either, but aphorisms too! Pretentious bastard.

Meet a Sebastian at a book launch and cut short obligatory disquisition on Scottish class system by glassing the fucker right in the face. 'Sebastian' , eh (+ whimsical reference to Nietzsche or Cioran here).

F. sidles up to me, at his own mother's funeral no less, and inquires about the sycophantic but completely accurate review of me he has published in a grotty small magazine, and which as a mark of my respect for him I flatly deny having seen.

The myriad of unconscious erections that come and go during my sleep, unsavoured, unspent. Intended for and – I like to imagine – somehow received by all the women I will never have and, whatever they might like to think, oh but they know it.

Haven't got that book, but the ones above are a good piss-takes of the longer, winder aphorisms in The Book Of Shadows; you might publish a collection, The Shadow of Books. I like some of the short ones (that don't appear to be snippets from some dandyish novel) like the following:

"Almost everything in the room will survive you. To the room, you are already a ghost, a pathetic soft thing, coming and going."

I always thought that book should have been retitled as "Passages in the Life of Don Paterson, Legendary Lover" though I agree the less narcissistic ones could be good.

"myriad of . . ." is the funniest shit on the internet right now.