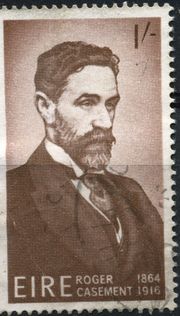 Speaking of Glasnevin cemetery, Mr Bloom would surely have had an opinion on one of its most famous in-non-habitants, Roger Casement. Are the remains reburied there in the 60s really his? Could they, as has been alleged, be Dr Crippen's?

It's heartening though to learn that the Irish form of Roger Casement is Ruairí Mac Easmainn. Phonetically, he was an assman through and through.