Japan and the IWC 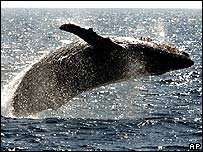 Under pressure from anti-whaling nations, not to mention land-locked African whaling enthusiasts and IWC allies Mauritania, Gabon and Togo, Japan has finally revealed the findings of its 'scientific' whaling campaign: they're delicious.

Also, about the word 'whaling'. Now there's a word you can guess wasn't invented by whales.