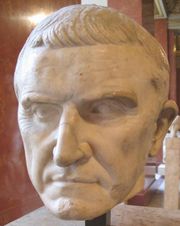 Writing of Galba, the disastrous first of four emperors in the turbulent years 68-69 AD (not that the other three were much cop either), Tacitus declared him capax imperii nisi imperasset: capable of having been emperor as long as he never actually did (become emperor).

Just look at how many words it took me to explain that in English. What English needs is an imperfect subjunctive tense, and fast.

Everyone should read and speak Latin. Starting with me.
Posted by puthwuth at 12.6.06