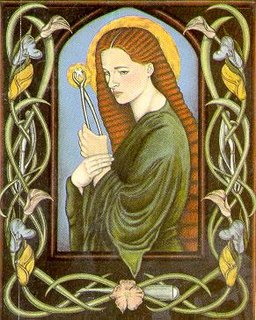 Run into one too many weaponless pagan mobs for your liking? Halo starting to slip? You need the Mutilator (TM)! 'I had such problems having my limbs/vital organs removed by rampaging heathens until I tried the Mutilator. Now I'm a limbless stump with no pancreas, spleen or liver, and I owe it all to the Mutilator!'


Have you noticed how portraits of John F. Kennedy always feature the President holding a rifle? Because when you think President Kennedy you think rifle, brains blown away by, don’t you? So you don’t want the rifle missing, on your Kennedy portrait. You’ve got to have the rifle.

So why is it then that portraits of Saint Simon traditionally depict him holding a saw? He was chopped in half by one, you see. Given which you’d think that someone at that committee meeting might have raised a hand and said, Maybe we could just give him a puppy or something to hold, something that isn’t a saw.

Ditto for the dentist’s patron saint, Apollonia, and her ubiquitous pincers (had her teeth wrenched out with one by an angry pagan mob).

Ditto for St James Minor and his fuller’s club (was bludgeoned to death with one).

And ditto too for St Agatha and her pincers. This time the angry pagan mob fancied a bit of boob, and used the pincers to remove her breasts. One small problem with this was the similarity of the severed breasts to bread rolls, duly christened ‘St Agatha’s Bread’, and also to bells, bagging Agatha the gig as patron saint of bell-founders.

But my point remains the same. Why lumber the poor woman with the pincers all the time?

Do her a favour, Christians. Next time try flowers or a bottle of wine. Give the girl a break.
Posted by puthwuth at 1.6.06