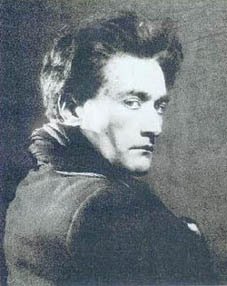 Antonin Artaud spent some time in Ireland in the summer of 1937. He brought with him something he called the Staff of St Patrick, which he'd found very handy in solving his divided loyalties over sex and art (the true artist must abjure sex, he thought). He thought the Irish might be interested too, having perhaps got wind of the free love culture so comprehensively undermining artistic expression at the time in De Valera's Ireland. After some mishaps on the Aran Islands involving non-payment of rent he stormed a Jesuit house and was arrested for breach of the peace. Six days in jail later he was deported to France, where he was treated by Jacques Lacan.

If he still looks rakish in his own asexual way in the above picture, his appearance in Dreier's Passion of Joan of Arc always reminds me of a more swivel-eyed Buster Keaton.

Irish poet Aidan Mathews has written a radio play about his time in Ireland.

Artaud says: 'All true language is incomprehensible, like the chatter of a beggar's teeth.'
Posted by puthwuth at 6.6.06