Hair of a Shrimp 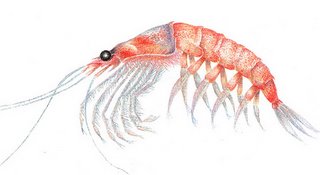 Spanish manager Luis Aragones turns down a bouquet of flowers at the Spanish training ground: 'There's no room up my arse for the hair of a shrimp, never mind flowers.'

Is he saying that if he did have room up there for an intrusive, bum-frequenting shrimp (and since when do shrimp have hair?) he'd go away and think about sticking the flowers up there too? And since when has the receipt of a bunch of flowers been followed by sticking them up one's bum? Is that a Spanish thing? There are many reasons why someone mightn't want to have dinner with me, but for the woman to say 'There's no room up my arse for a Bavarian brown bear's paw, never mind an Indian meal'... well, it just wouldn't make sense.

I feel for the shrimp. But then I always do, in moments of crisis. When Charles Haughey died, when West Ham went two up in the FA cup final, I felt for the shrimp. It's just an eccentricity of mine.
Posted by puthwuth at 15.6.06