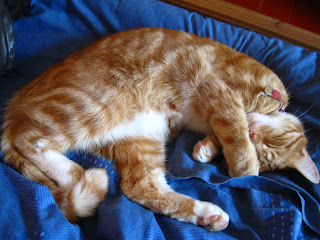 Our neighbour knocked: she wanted to know about our sink, whether it had been draining or not. No, it hadn’t. My spat-out toothpaste signed its way clingingly down the basin, like froth on the side of a pint-glass. First it’s the sink, she told us, then it’s the drains. How right she was: soon the drains were coughing up sewage all over the place. We were drowning in shit. Get a whiff of that! The quadruped’s black button nose flared in disgust.

Sniff of the pouch means. Shoelace dangling. Means. Thing. Something. Bumhole smell. Mine. Theirs. Enemy. Noses under the fence and paws in the door. Hate! to bleeding tatters. And deserved. Over the fence and away.

Neighbour. Has name. But not essential that know.

Sits on her cushion, the other, or mouth in trough, after dance demanding, also smells when approached. Propelled along the tiles, the iam rebounds from the skirting board. Ping! Or sit in the window for hours on end. The sky falls down piece by random piece, hopping and squawking.

Consider me approachable, available for opening of security gate round the side in case of lost keys, emergencies or. Conscientious about. I pride myself on. If we had children then conversations about, the neighbours and I. I have no children. My children are grown up. My children are dead.

The important thing is to bury the turds where no one will. Sniff. Ever. Scrape the muck over and pat or throw up. (The muck.) Behind the fridge is a hole in their eyes. No turds allowed. For going asleep. The milk bottle top that moved, that time, behind the fridge. That was the great event.

Except when the fireworks go off, Guy Fawkes’, New Year’s, never goes in there normally. Scaredy boy. Come out, come out!

First lie on the radiator, then senselessly, slowly kill you, then lie on the radiator again. Then lick the bleeding shreds dry. I might. Just don’t expect me to clean up all that shit in the garden. If that’s there where it came from, then stick it back up there!

After a leap, a series of abrupt shakes of the head has the desired effect of resettling the bones in the ear. Then all is well.

The next morning it had all gone, presumably back down the sewer. We never had any problems after that.
Posted by puthwuth at 18.11.08