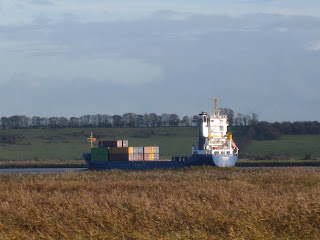 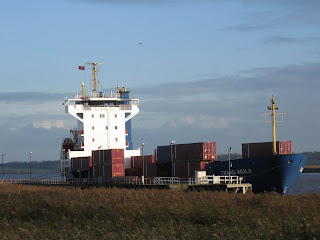 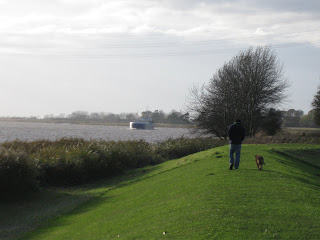 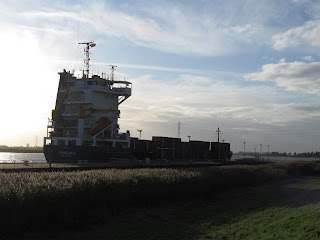 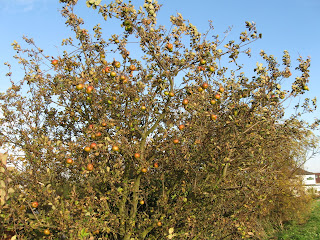 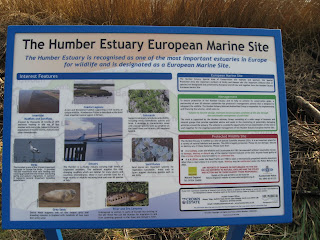 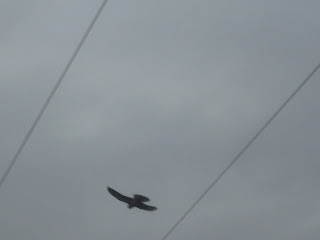 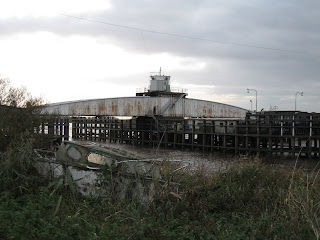 Another estuarial away-day, through the pleasant alluvial scatter of hamlets around Blacktoft and Yokefleet. This latter was the ancestral seat of the Empson family, inspiring William Empson’s ‘Flighting for Duck’:

The darker silhouette is where a barn
Straddling two banks over a lesser channel
Stands pillared upon treetrunks like a guildhall
Empty, mudheaped, through which the alluvial scheme
Flows temporary as the modern world.
The mud’s tough glue is drying our still feet.
A mild but powerful flow moves through the flats
Laden with soil to feed the further warping...

‘Warping’ is land laid down from tidal river water, Empson explains in a note. A reference to an air-raid siren reminds us of Blacktoft’s wartime moment of fame, when Lord Haw Haw mentioned it in one of his broadcasts, apparently mistaking it for Hull.

That’s a sparrowhawk in flight, I believe. Unless it was a kestrel.

I wrote a poem about the place, a while ago now, which featured ‘A man and his dog – always one man and his dog’, so imagine my delight at having just such a couple oblige me by ambling along the dyke from the Hope & Anchor pub. Dropping into this Laurel and Hardy-themed hostelry, the curious can pick up a copy of Historic Blacktoft and read of local worthies such as the Merry Miller, Thomas Hardeslow. This merry man was a strong believer in ‘Holy Day’ festivities, ‘where he not only got drunk, drinking the ale the village bracatrices had brewed, but he also expected everyone else to get drunk as well. Indeed he would be very sorely grieved with anyone who remained sober.’ As the 1363 ‘Yorkshire Sessions of the Peace’ record: ‘Just as the Ascension Day festivities had ended, Thomas Hardeslow, the Lord’s miller did flog and wound Alan Rede of Blaktoft at Blaktoft, because he hardly ever turns out drunk with his way of life.’