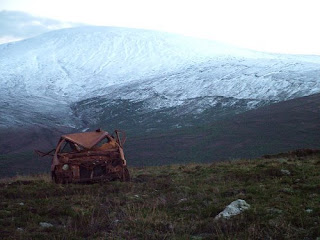 The Independent reports on a Scottish town so sectarian that the local Subway cannot be painted green, for fear of attack by Rangers fans. Better, or worse, or better worse:

Traffic lights, with their green bulbs, are another victim. Between 2004 and 2007, 205 sets of traffic lights were smashed, costing the council nearly £17,000 to repair. There have even been claims that drunken youths have attempted to set fire to grass.

Presumably down the road, rabid Celtic fans stand around throwing stones at the sea or poking themselves in the eye.

The report did, however, remind me of this episode from Hugh Maxton’s memoir Waking, in which for possibly the first and last time in history sectarianism demonstrates its innate benefits. ‘Bob’ tells the writer how he had been blasting stones all day in Ballymorris (in Co. Wicklow) and stopped into Lawless’s hotel in Aughrim for a mineral water (he was a teetotaller):

When the Black and Tans arrived suddenly in front of the hotel, there was no time for anyone to slip away or to hive off from suspect acquaintances. Bob breathed to his neighbour ‘I’m done for, I’ve the remnants of dynamite in my pocket.’ The Tans advanced down the bar, throwing this one or that across the bar to be rummaged or searched. When they were two paces or one away from Bob, his neighbour broke out in execration heightened in the Wicklow whine of the man then and Bob telling it forty years later – ‘no point searchin’ the fuckin’ Protestant fuckin’ bastard, ahny hoaw, for he’s fuckin’ one of yees ahny hoaw’. I meet Cousin John and he confirms the story. But now it is Bob’s brother Jim who has the lucky escape.