Beckett's first full-length play was Eleutheria, written in French in 1947 but not published or performed in the author's lifetime.

The first English translation by Michael Brodsky contains a number of amusing howlers, of which my favourite involves a knife-wielding boatman. In French (note similarities to boating episodes in Krapp's Last Tape and That Time):

M. Krap: We were on the water. Your oarsman had a knife.

What?! A canotier is a straw hat. The couteau is not a knife but an osprey feather. 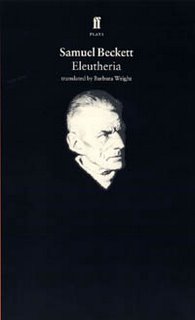 'Your boater had an osprey', as Barbara Wright puts it in her subsequent and much better version.