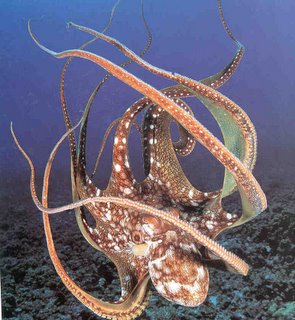 When faced with danger, a BBC end-of-year review informs us, an octopus can wrap six of its legs around its head to disguise itself as a fallen coconut shell and escape by walking backwards on the other two legs. Or so scientists have discovered.

When faced with danger a coconut, by contrast, is incapable either of disguising itself as an octopus or of walking away backwards. It can always fall on your head but only as a last resort, much preferring the view from the top of the tree to being buried in the sand, with the attendant risk of featuring in a Fanta or Bounty Bar commercial.

The plural of octopus is octopodes.
Posted by puthwuth at 30.12.05