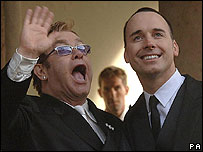 Gay rights groups have issued a plea for tolerance of Elton John's laughable records. 'Anyone who can record "Candle in the Wind" and keep a straight face probably needs some time alone in a locked room with Mike Tyson', a spokesman said, 'but we're appealing for tolerance and respect, even for someone as musically perverted and unnatural as Elton John.'
Posted by puthwuth at 21.12.05

i was browsing the web and found your blog , before i leave your blog i would like to you /your team members /your blog visitors " Merry Christmas "