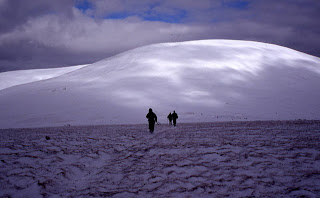 Countering the contemporary distrust of the word, the poststructuralists’ rejection of the possibility of truth and meaning, Heaney reasserts the metaphysics of presence. His poem is informed by belief in a transcendent metaphysical order which is pre-literary, pre-rational, and ultimately mysterious. (Elmer Kennedy-Andrews on Seamus Heaney’s ‘Mycenae Lookout’)

It is striking nonetheless that both ‘For the Union Dead’ and ‘Keeping Going’ operate through a series of juxtapositions of image clusters extrapolated from a little suite of master images introduced at the outset. If there is a Lowellian influence at work in ‘Keeping Going’, however, it is an influence absorbed so deeply that it issues in a poem that is radically unLowellian in tone and vision. Indeed Heaney’s text is one of only a tiny handful of poems written in the fifty years since the completion of ‘For the Union Dead’ to achieve a comparable weight and authority of utterance, and it does so in a music no less decisively new and distinctive. (Patrick Crotty on Seamus Heaney’s ‘Keeping Going’)

Mere topicality, of course, is a far from adequate explanation of the poem’s long-term influence, however much it might account for media attention in the 1970s. It is not the fact of the poem’s response to the Troubles which renders it so compelling but the manner of it. As with the later sequence, ‘Wreaths’, from 1979, ‘Wounds’ is notable for a deceptive simplicity of style allied with a complex political (in the broadest sense of that term) layering. In a letter to Longley from 1973, Brendan Kennelly describes it as ‘the best poem I know written about the troubles in Belfast.’ ‘The problem with most of the poetry written about your city’, he continues, ‘is that, to put it bluntly, the poems are sectarian and therefore crippled. “Wounds” knows no frontiers and its pity is unconfined.’ (Fran Brearton on Michael Longley’s ‘Wounds’)

Jazz is an endless source of invigorating possibility and Longley’s profound engagement with this “huge” art form marks him out as a poet of the world, a poet of humanity who embodies and embraces paradox and play, order and indeterminacy. Like jazz musicians, the poet is a performer, and the relationship between performer and audience, poet and community is central […] “Words for Jazz Perhaps” not only speaks to the large-scale complexities and wide-reaching extent of Longley’s unique, intricate music but insists upon breathing new life into Irish poetry and broadening the scope of all poetry to ‘accommodate everything’ in this way. (Maria Johnston on Michael Longley’s ‘Words for Jazz Perhaps’)

These from the new issue of Irish University Review, a special on the theme of Poems That Matter 1950-2000 edited by Peter Denman. The other choices are:

Much to chew on here, from the memoir style of Neil Corcoran’s piece, with its antenna-twitch of sensitivity to the Heaneyesque intertexts in ‘Our Lady of Ardboe’, to the suasive density of Patrick Crotty on Heaney (with a side-order of MacDiarmid intertexts), the unblushing bardic mantras of Elmer Kennedy-Andrews on the same author, the fascinating inflections of poetic dinnseanchas offered by Máire Ní Annracháin in Biddy Jenkinson’s ‘Gleann Maoiliúra’ (and that’s Lugnaquilla in Glenmalure up above), to the as-ever-richly-suggestive Maria Johnston on jazz in Michael Longley. All yours for €12.

And for the record, the sentence by me at the end of the first paragraph on page 220 should read ‘Modernism in Mahon is more a rumour than a presence, ritually acknowledged rather than acted on’ (scratch the plethoric ‘rather’ printed – aagh! – after ‘rumour’, in other words.)
Posted by puthwuth at 27.12.09

Hi, it's a very great blog.
I could tell how much efforts you've taken on it.
Keep doing!