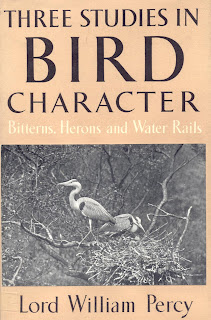 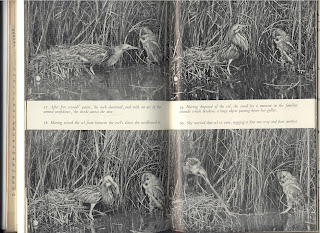 As one of the 7th Duke of Northumberland’s thirteen children, Lord William Percy (1882-1963) may have had more free time on his hands than most to devote to the study of waders. The account of his findings, published in 1951, is a wonderful small classic of a book, Three Studies in Bird Character: Bitterns, Herons and Water Rail, abounding in bittern lore. Sir Thomas Browne kept a bittern in his study in an attempt to discover of its mysterious boom. Our author weighs in:

Whatever may be the mechanism by which the booming bittern produces these notes, they have certainly not struck the human ear with associations of the season of the resurrection of life and hope, for allusion to the bird and its voice in ancient literature is uniformly that of a symbol of desolation and woe. As the prophet announces the doom of Babylon, ‘I will also make it a possession for the bittern and pools of water. I will sweep it with the besom of destruction saith the Lord of Hosts’ (Isaiah xiv.23), so the inhabitants of Nineveh are warned that ‘the bittern shall lodge in the upper lintels of it; their voice shall sing in the windows, desolation shall be in the thresholds’ (Zeph. ii.14).

[A footnote adds:] The Revised Version in substituting ‘porcupine’ for bittern mars the rhythm of the passage and seems to convert a paradise for bitterns into a purgatory for porcupines. [Foonote ends.]

If as the age of superstition recedes the implication becomes less harsh, Chaucer’s ‘As a bitore bombleth in the myre’ still retains the ring of melancholy, and it is not till the Middle Ages that references to the bird in the ballads and folklore of our forefathers have lost their former sinister connotation. From then on the bird becomes a cherished object of the chase – ‘euery egge of euery Bittour’ rigorously protected by such laws as Act 25 Henry VIII, XI, 25 – and a favoured delicacy on their tables.

The reference to eating bitterns may explain another folk name for the bird, the butterbump, though the good Lord forbears from offering any recipes. The birds’ melancholy aspect no doubt accounts for their presence (‘the bogey bittern’) in Fungus the Bogeyman, that most fennish of books, as I was reminded by a commenter the other day. ‘Like Surface Bitterns, and like Bogeymen themselves, they are SOLITARY, SKULKING and CREPUSCULAR.’

Our twitcher Lord follows his three species for an entire season, spending what must have been hours a day deep in the reeds stalking the birds, and giving instructions not just for how to approach a bittern but even how to pick one up:

If you think it worth while to assure yourself that the thing can be done, you may wait till the booming starts again, rise silently to your feet, and dash across the intervening space to find Botaurus half defiant, half cringing, at your feet. At the cost perhaps of a blood-stained knuckle from a stab from his bill, which is neither as vicious nor as powerful as it reputed to be, and is in any case no more than you deserve, you may pick him up, for in such circumstances his physical or emotional condition seems to rob him of the power of pulling himself together for sudden flight. Tossed into the air from your hand he will wing away heavily to the other end of the reedbed, or, loosed on the ground, slink off hunch-backed into the reeds.

The book contains no fewer than 80 quizically-captioned plates: ‘A heron descending through the branches of a tree resembles a man walking on a slippery road in imminent danger of losing his balance’, ‘The impasse reached in plate 51 [two bittern chicks tugging at either end of an eel] is resolved, the parent first abstracting the eel from both her young, re-swallowing it itself, and then suppressing all further contention in spite of their protests’, and, combining evidence of the water rail’s habit of picking its young up in its bill with an unintentional, surely, schoolboy pun (our Lordship is far too high-minded for that), ‘One laggard grabbed by the cock and carried off in his bill.’

I have enjoyed reading this book so much that I more or less resent taking time off from looking at it to have to talk about it here instead. In case anyone is wondering what on earth that owl is doing in the plates I’ve reproduced above, the answer is that it’s stuffed. Lord WP decided to experiment by placing the owl by the bittern’s nest with some dead eels lodged between its claws. ‘With an air of the utmost confidence she strode across the nest, walked straight up the owl, seized the eel from between its claws, and swallowed it.’

When I read Tim Dee’s The Running Sky and looked up copies of John Buxton’s out-of-print study of the redstart, which TD was recommending, I blanched at the prices I found. Copies of Three Studies, by contrast, are available for about a tenner.

I can now almost feel the year has ended on a positive note. But let’s not get carried away here. And yet: Lord William Percy, master naturalist, I salute you.
Posted by puthwuth at 17.12.09

Labels: but what about the porcupines?

Is this the same Lord Percy who wrote an introduction to the Born Free book?

Yes he is one and the same! He was great friends with George and Joy Adamson, and there are wonderful pictures of them all at the camp with Elsa and her cubs!

Yes, indeed it is.
He was a great friend of both George and Joy Adamson.