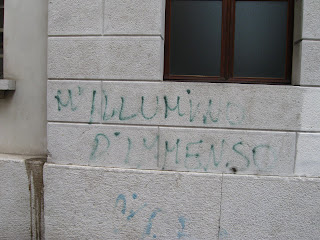 Trieste is the Hull of Italy. Each city is a port out on an eastern limb, often overlooked by the rest of their respective countries and... there the comparison breaks down. Oh, and both cities have a disproportionate literary tradition (Stendhal was French consul in Trieste, and then there’s Svevo, Joyce, Umberto Saba and Magris, for starters). I mean, it says something about Trieste that Philip Larkin should have chosen to spend that crucial formative decade there rather than in Florence, Milan or Venice: a strangely neglected period of his life, I find. And consider that Triestine graffito, a pleasant change for me from the endless bits of Wilfred Owen and Isaac Rosenberg you see sprayed on gable-ends round the place here in East Yorkshire. Ungaretti served at the battle of Caparetto, I did not know before my latest trip to Trieste, though his later enthusiastic fascism all through the Mussolini years takes any dulce et decorum est edge off that fantastic two-liner of his, above. He shared the irredentistism of his fellow Futurists, who sent a Volunteer Bicycle Brigade to the northern front, which must have come in handy among the tanks and mountains of that savage theatre. The Italians lost 1000 men a day for two years; there is still a street in Trieste named after the walrus-faced old idiot who masterminded this hecatomb. On the subject of statues, I heard from John McCourt (author of the most excellent biographical study of the Triestine Joyce The Years of Bloom and a fine singer too, let me add) that all manner of Austrian statues are being re-erected there too, who knows why, or why now. And still on the war, Marinetti, I learned, spent his war years digging latrines, while Wittgenstein too saw action on the Italian-Austrian front, serving as a private in his war-long but ultimately quixotic attempt to get himself killed. I didn’t encounter any contemporary irredentists casting surly glances over the border at Koper (Capodistria) or Rijeka (Fiume, site of D’Annunzio’s finest inglorious hour), but given the tendency of these towns to change name under a new flag, I hope the Italians leave well enough alone in the nearby Slovene district of Arse.

Why Joyce, who used to hide from thunderstorms in the cupboard, ever agreed to live in Trieste I don’t know, given that copious thunderstorms cascaded down just about every single day I was there.