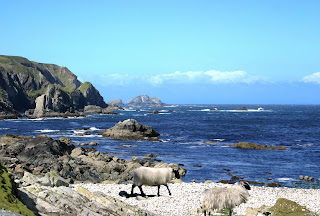 I don’t have a copy of The Best of Myles to hand, but fondly remember his rejection of the suggestion that, while the average English user had a basic vocabulary of 400 words that average Irish speaker used 4000. The real figure is in fact closer to 400,000, he declares, while in Donegal there are some Irish speakers so rich in Gaelicness that they pride themselves on never using the same word twice in their lives. I was reminded of this more than once during this last week in Donegal, as during a presentation on the 89-year old who was commended to us as the possessor of the richest Irish in the county. Irish-speakers will frequently use the patronymic system, e.g. Tom Phaidí Sheáin, but this man had no fewer than ten components in the family tree of a full name he carries around with him, tracing his lineage all the way back to the 1730s. If he isn’t in the Book of Leviticus too he obviously should be.

I’ve been to the Donegal Gaeltacht before (Gortahork, Falcarragh), but one of the things that makes Glencolumbkille distinctive is that those places, remote as they are, are at least, or can be, on the route to somewhere else. Glencolumbkille is at the end of the line and 26km from the nearest sizable town (and ATM), Killybegs. It appears to be a Garda-free zone too, with all the delightful implications this has for pub opening hours. The pubs are full of music, just about every evening. I was most disappointed to learn that the great Glen fiddler James Byrne had died last November, but I got to see his widow and daughters play in Roarty’s, several times, as well as the legendary Tommy Peoples and, down from Glenties, Peter and Jimmy Campbell. Oideas Gael, where I was taking my Irish language course, has one of the few surviving examples of the tin fiddles endemic to this part of the world, as occasionally played by the greatest of all modern Donegal fiddlers, John Doherty. Donegal fiddling, to start repeating myself from the last post, appeals to me in its relentless eschewal of vibrato and unapologetic scratchiness, its horde of eldritch eighteenth-century Scottish crossovers, and utter singularity to its own place and nowhere else.

But as for the language itself: I found the experience of speaking Irish for a week (well, parts of that week at least) entirely pleasurable. During the week our host, Liam Ó Cuinneagáin, circulated copies of a journalistic turd dropped by brain-donor reject Kevin Myers in the Irish Independent rehashing his very familiar desire for the Irish language to disappear off the face of the earth. Even if every remaining speaker of Irish was prompted by this article to jump off the cliffs of Slieve League, all 1972 feet of them, learning and speaking Irish would be just as worthwhile and admirable an endeavour. One of the things I debated up there with my fellow student Saerbhreatach was what if anything makes Ireland any different anymore from Britain, and while we had somewhat responses to that (S. has written, in response to a critique of his position by Barra Ó Seaghdha that ‘I wished to inquire whether a work can be Irish yet not be in that language. I ultimately don’t think that it meaningfully can be, and that it forms a kind of sub-section of Anglophone poetry, which is not identical to English or British poetry’; I can’t link to the original article by BOS as the page appears to be currently off-line), what was I saying here? that like S. I strongly feel, and for entirely un-nationalist reasons, that to have any kind of professional involvement in Irish Studies, as that subject is studied in universities, is impossible without a working knowledge of Irish, and that what goes by the name of Irish Studies in the absence of such a knowledge is a dereliction of scholarly duty, a kind of fraud, even. But then there is that question of nationalism and the caduceus-like coils in which it has traditionally wrapped the language. Neither S. (see soundbite above) nor I is any kind of card-carrying Irish nationalist, and both find e.g. Thomas Kinsella’s fondness for seeing his involvement with the Irish language as a species of nationally mandated one-man crusade as, well, meaningless to us. But this leaves what? Is the Irish language just so much material, in the way that Icelandic or Swahili would be, a holiday destination for our anthropological field trips? Perhaps this is a question for which I should provide a snappy answer, if only to avoid ever having to dwell on it again, but while I for one don’t fancy being called some manner of neo-Unionist by Barra Ó Seaghdha, and am perfectly familiar with the parochialism of would-be post-nationalist platitudes (see Kevin Myers passim), I was happier to spend the week pondering facts about Irish such as these:

the Irish proverb Is fad ó bhaile a labhraíonn an pilibín (‘it is far from home that the lapwing sings’) refers to the lapwing’s habit of leaving its nest to sing, to mislead predators as to the location of its eggs. This I did not know.

that the first of the list of seven times’ seven words that end in ‘óg’, birds, goes like this: druideog, fáinleog, faoileog, fuiseog, glasóg, riabhóg and spideog. The other six refer to trees, martime things, parts of the body, plants, things around the house, and women, and I will happily burn a CD of Donegal fiddle music for the first person who tells me what they are.

Photo (not by me, own pictures to follow) shows the awesomely remote abandoned village of Port, over the hill from the Glen.

And to everyone I met there, from the barmaid leaning out the window watching the Glen v. Carrick GAA match through binoculars, to the fiddlers, to everyone who spoke even one word of Irish I say: Mór sibh a laochra Gaeil!
Posted by puthwuth at 26.7.09

"Seal-snort", that's marvelous. I also like the barmaid with binoculars (bet you didn't have the camera with you).

I did indeed photograph her leaning through the window, and may even post it, later this week.

Correction. I see now that jellyfish = "seal snot". Weird, I was sure I saw "seal snort". Should have gone to Spec-Savers!

from an internet shop in Vienna, gan focloir in aice liom

Here's a handy list of birds' names in Irish:

Cen fath nach gcuimhin leat ar "citeog" - a sinistral such as yourself? ;-)

PS. I don't make my identity public but I emailed you my blog url and the last time we spoke was in Bray Dart Station...

The article you refer to can easily be accessed at drb.ie (go to archive and trawl or google phantom of exclusion and barra o seaghdha). They might find that I do something more interesting than labelling people as neo-unionists. And I'll happily engage with anyone who disagrees with me.
**
Re birds, quite a few years ago, I was lucky enough to find (in the Cafe Liteartha in Dingle) the 'list of North-West European Birds in Eight Languages' once issued by Corrib Conservation Centre. Fascinating, whether you incline to Oulipo or to ornithology.
**
Barraghdhghdhaaaaah O Seaghdhghdhaghdhghdhaaaaaaah

Thanks for that, Barra.

Don't think I think all you do is go round the place labelling people neo-Unionists all the time and nothing else. Far from it. Your article on Justin's book (which was indeed offline when I posted this, though I see it's back now) is a very generously detailed response indeed, whatever disagreements I might have with your findings.

And thanks for the tip-off re bird names.