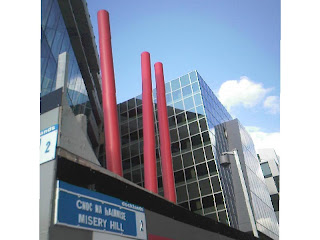 I was pondering just the other day the nature of my objections to the business of Irishness and Irish Studies when along came Stephen Watt’s Irishness and Contemporary Writing (CUP) to remind me what I mean. In a comparison of Beckett and Derek Mahon on p. 142 I see the author misspells, twice, the word ‘fouillis’ from Beckett’s mirlitonnade on Arthur Keyser as ‘foullis’, not to mention ‘coeur’ as ‘couer’ and ‘minuscule’ as ‘miniscule’, but on the following page we read this:

Then there is the burble concerning the memorial to Caroline Hay Taylor at St André’s cemetery. Mahon’s burble follows Beckett’s poem closely in most respects (...) Each depicts Taylor as remaining ‘true to her belief’ (fidèle à sa philosophie) that ‘there is hope while there is life’ (qu’espoir il y a tant qu’il y a vie), and each mentions that she escaped Ireland with this view intact. But Beckett dates this flight as occurring ‘en août mil neuf cent trente-deux’, which Mahon ‘translates’ as ‘in August nineteen-twenty-two’. Why makes this revision? Did Mahon’s considerable facility with French fail him at this moment? Probably not.

The reason, Watt goes on to suggest, for Mahon’s mistake is that he has moved her death back ten years to coincide with the Irish Civil War, thus underlining the dead woman’s ability to retain her ‘unflagging optimism at a historical moment least hospitable to the cultivation of hope’, with the ghost of a premonition of the Northern Irish Troubles thrown in too. She ‘remained forward-looking in circumstances least likely to cultivate hope or affirmation; by contrast, 1932 in Beckett’s original exercises a far more restricted connotation.’

For a start, I can’t believe that was anything other than a mistake on Mahon’s part. But if not, to suggest that the fact of the Irish Civil War in 1922, with all its opportunities for ready-to-hand poetic significance, should trump the bald fact the woman died in 1932 – this embodies perfectly, for me, my objections to the unearned exceptionalism of Irish Studies. She died in 1932, not 1922. Some pointless Irish civil war is not a good enough reason for assuming to yourself the power to alter this fact. Mahon made a mistake, and I defy anyone to convince me otherwise, or explain why that otherwise can be anything other than a species of wish-fulfilment.

Photo shows an old stomping ground of mine, Misery Hill on the south bank of the Liffey. I hadn’t been back for a decade or so. Someone had stencilled ‘I’m Nobody? Who Are You?’ on a hoarding on the other side of the street.

Then there's a pair of us - don't tell!
They'd banish us, you know.

How dreary to be somebody!
How public, like a frog
To tell your name the livelong day
To an admiring bog!
Posted by puthwuth at 30.7.09

I think it was Derek Mahon who said years ago that asking whether or in what sense so-and-so was an Oirish wroiter was enough to clear a room. The figurative room in question was surely not a classroom, more likely a reception room for a literary event.
Blame the summer schools for allowing students to write essays on the Oirishness of Roddy Doyle and others and get credits for doing so.
This endemic tendency needs to be exorcised by having these students start the day wearing leprechaun hats and singing the fields of Athenry and Oirland's call on alternate days of their programme. Plus, for each, a compulsory module on Religious and National Stereotypes in the Father Ted series.

Derek Mahon did indeed say that, almost forty years ago now. But has the reception of even Derek Mahon's work, even among avowedly anti-nationalist readers of Irish poetry, has had the sum effect of prolonging the shelf-life of that question or of putting it to bed, once and for all? The former, I would argue. Whose fault this is I can't claim to know. It seems that history is to blame.