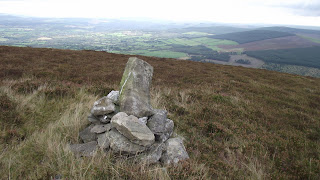 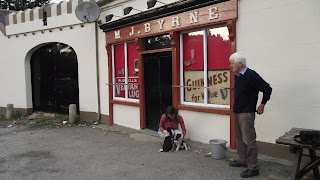 Follow you up to Carlow? I rarely wake up thinking I will have wasted the day unless I visit Ireland’s bonzai county, but when Fiach McHugh O’Byrne tells you to do something it’s probably as well to listen. Oh, and that new O’Hara’s stout (from Carlow) ain’t bad, I must say. Finding myself in Ireland last week and in need of a good hangover cure, I took myself south through Wicklow to Glenmalure and the mythopoeic mountain of Ballinacor. Though to all appearances an unremarkable protuberance on the Greenan to Aughavannagh road, Ballinacor was the site of Fiach McHugh O’Byrne/Fiach mac Aodh Ó Broin’s mountain rath or fortress, Gabhal Raghnaill, from which he ruled over much of Wicklow in what was by then (the late sixteenth century) the last surviving Gaelic kingdom in Ireland, and one whose close proximity to Dublin and the Pale made his elimination all the more pressing in the eyes of the crown. He supported Rory Og O’More’s rebellion in 1577 and survived retaliatory raids on his territory after the murder of Sir Nicholas White’s son-in-law. He pledged allegiance to the crown in 1579, but continued in his cattle-raiding ways, and the following year engaged Baron Grey de Wilton and his 6,000 troops in the Battle of Glenmalure. The mountainous terrain and tactical naïveté of the English led to heavy losses on their side (up to 3,000 soldiers), as commemorated in ‘Follow Me Up To Carlow’, that goriest of Irish rebel songs:

Lift, MacCahir Óg, your face. You’re brooding o’er the old disgrace
That black FitzWilliam stormed your place and drove you to the Ferns
Grey said victory was sure and soon the firebrand he’d secure
Until he met at Glenmalure with Fiach MacHugh O’Byrne.

Curse and swear Lord Kildare
Fiach will do what Fiach will dare
Now FitzWilliam, have a care
Fallen is your star low
Up with halberd out with sword
On we’ll go for by the lord
Fiach MacHugh has given the word,
Follow me up to Carlow!

See the swords of Glen Imaal; they’re flashing o’er the English Pale
See all the children of the Gael, beneath O’Byrne’s banner
Rooster of the fighting stock, would you let a Saxon cock
Crow out upon an Irish rock - fly up and teach him manners.

From Tassagart to Clonmore, there flows a stream of Saxon gore
But great is Rory Óg O’More at sending loons to Hades.
White is sick and Lane is fled and now for black FitzWilliam’s head
We’ll send it over, dripping red, to Liza and her ladies.

Even after his triumph, Hugh remained a beleaguered figure. He assisted Red Hugh O’Donnell after his escape from Dublin Castle and flight across the mountains to Glenmalure. Coincidentally, since O’Donnell was one of the Gaelic lords who would end up in continental exile after the Flight of the Earls in 1607, it is worth noting that the court bard of another flighty earl, Cuchonnacht Maguire (Cú Chonnacht Mac Uidhir), Eochaidh Ó hEodhasa, spent some time at Gabhal Raghnaill. Hugh was forced to sue for peace on his knees in 1596, but various local skirmishes later was tracked down and killed in 1597. His staked body was displayed outside Dublin Castle and his pickled head brought to London for the queen’s inspection, before ending up in the fork of a tree in Enfield Chase, where I trust he is still remembered fondly.

The Leabhar Branach is the bardic praise book of the O’Byrne clan, containing many poems in praise of Hugh. It was edited by Seán Mac Airt for the Dublin Institute of Advanced Studied in 1944 and, let me assume, won’t be getting reprinted any time soon. Some of those mildewed old editions do and some don’t have facing translations. This is one that doesn’t, a fact that has ever so slightly hampered my ability to read all 200 melodious staves of the average ode extolling Hugh’s ability to put the Saxon infidel to the sword. I was all primed to buy a copy in Hodges Figgis on this last visit of mine, only to find it not there anymore, a purchase that must have caused some surprise and even shock to the sales assistant who finally got the thing off their hands. The next time, maybe.

The territory is also sacred to mysterious Irish-language poet Biddy Jenkinson, let me also mention, a writer whose work I study with much respect and varying degrees of basic comprehension.

Coming down the valley I was charmed to come across M. J. Byrne’s pub in Greenan, which I understand has been run by a pair of brothers for many decades now, its décor unchanged since 1921. It was not open for business as I passed, though I did encounter a pair of local halfwits preparing to drown some unwitting collie dog puppies in a bucket (see photograph).

As you may be aware, Lord Grey de Wilton's secretary on the occasion of that famous battle in Glenmalure was Edmund Spenser, freshly arrived in Ireland for his new appointment. I have used the phrase 'Loons to Hades', from that bloodythirsty ballad, in my poem-in-progress on Spenser's life.(See last issue of Irish Pages.)