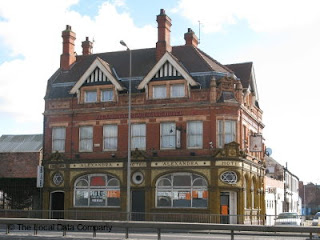 Finding myself in the area yesterday, I dropped in on Hull’s only Jewish-themed pub (those stars of David on the façade), the Alexandra Hotel on Ropery Street off Hessle Road. A quick look on flickr suggests claims the building is a former synagogue are mistaken, but that the surrounding area was formerly a Jewish enclave and that there is still (?) a Jewish home for the elderly nearby. There is also a small Jewish cemetery just behind the pub, and inside it, I’m pleased to report, a raucous African grey parrot called Sparky, who once told Archbishop Sentamu to eff off¸ or so I’m told. He’d turned up for the annual fishermen’s commemoration, in case you’re wondering. The pub’s wood panelling is superb, as is the sight of an old piano on a small raised stage. The opening hours are advertised as 6 a.m. to 3 a.m. and you can stay overnight (those tricky three hours...) for fifteen quid. There is not very much else to do in the area, let me be the first to admit, though I was pleased the neighbouring Inkerman Inn is currently open too, after an intermission in the realms of the closed.

Still on Hull pub lore, I was discussing just that subject with Sean O’Brien the other week when he stumped me by mentioning a pub called the Marrowbone and Cleaver. I can now report that this is the present-day and spooneristically renamed Barrowman on Hotham Road.

One thing I’ve noticed with pubs like the Alexandra Hotel is how many of them stock Chestnut’s Dark Mild, which you never get in pubs on Newland or Prince’s Avenue, despite the wide range of beers most Hull pubs stock. Goes down very pleasantly too. But young people won’t drink mild. So what will happen to these historic pubs when their few old drinkers all die off? There was a depressing feature in yesterday’s Guardian on the South Bank area of Middlesbrough, where multi-generational unemployment is rife and the recession is picking off whole streets, canned-up house by house, and what was once a working-class culture falls through the trapdoor into sub-Shameless destitution. It is an appalling sight to behold, and there is plenty of it round here too, and what am I suggesting we do about it? Drink pints of mild in quirkly old historical pubs, that’s what. Well, it’s a start.
Posted by puthwuth at 24.10.10

Labels: And dark and true and tender is the north

I think some kind of mass exodus of dark mild drinkers to Hessle Road should count as community service, right?