South Park, Genius Of (Fuck You, Dorphin! Fuck You, Whare!) 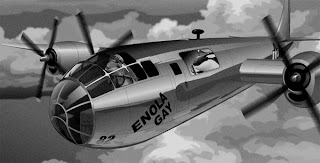 How scandalous that Comedy Central have only now got around to releasing series 13 of South Park on DVD, for those of us who don’t have Blu-Ray (or even know what Blu-Ray is). But what a marvellous reminder the episode ‘Whale Whores’ is of the genius, frankly, of this wonderful show. Stan is at an aquarium in Denver swimming with dolphins when a group of angry Japanese arrives, screaming ‘Fuck you, dorphin!’, and harpoon the poor creatures to death. The Japanese embark on a nationwide killing spree, taking in the Miami Dolphins football team while they’re at it, much to Stan’s horror. He gets involved with the reality show Whale Wars, but is unimpressed by their repeated wimping out from any real confrontation with the Japanese. Many ridiculous plot twists later he finds himself asking Emperor Akihito of Japan why it is the Japanese hate whales and dolphins so much. The answer goes back to the bombing of Hiroshima, which the Japanese believe (courtesy of a photograph the Americans were good enough to provide the morning after) that the attack was carried out by dolphins and whales. Stan is about to break the news to the Emperor that the attack was in fact launched by... when he is reminded that the Emperor has pledged to track down and kill everyone responsible. So he gets on the phone to Kyle, who photoshops a picture of the real culprits... a cow and a chicken. The episode ends with the Japanese leaving dolphins and whales in peace and launching a wholesale slaughter of cows and chickens instead. Randy congratulates Stan for making the Japanese ‘normal, like us’.

Tom Sutcliffe wrote in The Independent recently about this selfsame issue. Why don’t the Japanese understand how repellent we find whaling? He invited readers to imagine an Indian group coming to Britain to launch a campaign against the appalling scandal of the killing and eating of cows. What would people think of that? Roughly what the Japanese think of killing whales, I assume. My atrocity, your normality.

There is of course only one solution to this little moral dilemma, and one which South Park respects you, the viewer, way too much to need to spell out. But what a great show.
Posted by puthwuth at 29.9.10

There is indeed only one solution - but I'm not inclined to eat whales, and why should we force Indians to slaughter cows?

Not sure about dolphins, but surely a good (non veggie) argument against the killing of whales is that they are threatened with imminent extinction, unlike chickens and cows.