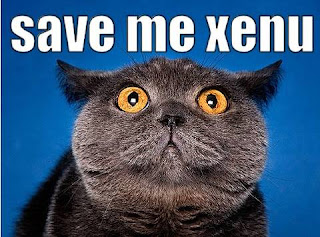 Scientology is, as everyone knows, a wacko blood-sucking cult, and knowing it full well myself from my rural Scientologist upbringing in Co. Wicklow I didn’t expect to learn anything much of note in John Sweeney’s return-to-the-scene-of-the-crime second stab at a documentary on it last night. One thing stood out, however. It is hilarious and pathetic that you or I can find out more about the teachings of Scientology in five minutes on Google than the deluded saps who give decades of their lives, and shedloads of money, to this wacko cult. The teachings involving, as they do, one ‘Xenu’, dictator of the galactic confederacy, billions of trapped alien souls, something to do with volcanoes and... sorry you’ve lost me. For Scientologists, however, access to this information is heavily defended. Stumbling across it prematurely, we are told, would lead to knowledge overload and brain collapse. So when trying to get out in the open just how wacko Scientologists really are (and since I was talking about South Park in my last post, you’ll remember the brilliant skewering they gave Scientology a few years back), Sweeney asked various celebrity Scientologists about Xenu. They denied it, giggled, professed not to know what he was talking about, and I thought – how marvellous. If only other religions could follows suit. You accost a Christian and ask him about Christ dying for our sins and rising from the dead and he squints at you, and asks what kind of weirdo you are. I mean who’d sign up a religion that believed in that? As a further twist on this, I remember a news story from a few years back about a beauty queen in Lebanon, I believe, who was coming under pressure from disapproving members of her Druze community. The Druze do not hold with exogamy, and very much prefer to keep themselves to themselves. They do not like sharing the tenets of their religion with outsiders. But, best of all, they don’t like sharing them with themselves either. Many devout Druze do not know what it is they believe in. But do so in a spirit of total reverence. Respect!
Posted by puthwuth at 29.9.10