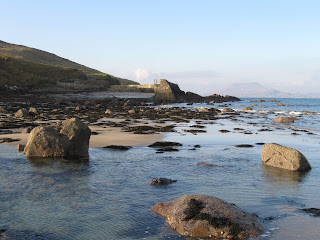 There are plenty of oystercatchers along the river Humber, at Blacktoft, Sunk Island, Keyingham, Paull and other places of avian rendezvous, but the closest I can come to a picture of these birds I took myself is the above, taken in Mayo last December. The oystercatchers would be the near-imperceptible smudges in the middle distance.

My occasion for this being the publication by Oystercatcher Press of Randolph Healy’s pamphlet Rattling the Bars. Living in my ancestral spawning ground of Bray, Randolph knows all about the practically green (non-eco, radioactive sense) sea washing up on its shores, and devotes much of these poems to his thoughts on radioactive and other forms of pollution, sometimes as filtered through his signature anagram randomizer (‘we pronuclear /now recap lure /of new purer coal //unclear power’). ‘Peel Me a Fruit Bat’ sounds like an out-take from Trout Mask Replica, while another title ponders ‘The Om in Remote the Not in Control’. But the stand-out poem for me is ‘Out-Takes’, which I read as a response to Heaney’s North, that most over-autopsied of Heaney’s books. The Grauballe man wept the ‘tar river of himself’, but even Heaney didn’t think of a self-inwoven simile as arresting as shitting oneself in the sense his near homonym Healy has in mind here:

One must be limp a long time
not to mob the tanned and maimed.

Surround the de-nippled torso
arms out as if no one was more willing
unworked hands judged beautiful,
whorls spiralling beyond naming

then rubberneck a neck-wrung ex-sixteen-year-old,
Munch-gape made of meconium
as if she had shit her self,
or someone sat on her while still warm.

I’ve always liked Randolph Healey’s poetry and am delighted to see it more of it in print.
Posted by puthwuth at 17.6.09